At six, Da-da's oldest boy, Nagurski, has developed a fear of monsters... which is a bit later than normal, but these things happen. To combat this, Da-da did three things:
What? Tikis, you say? Why's that? Because...


Go to your local Party Gulag and pick up some nine-foot-tall tiki totem pole cardboard cutouts (already bradded together) for about $5 each. Tape those suckers to the kids' doors front and back and BOOM: no more monsters.

If you're afraid of your house looking kitchy and destroyed, then you need meds or a stiff drink, 'cause you had children and children destroy houses and there ain't enough plastic in Dick Cheney's chest to cover your precious white furniture. (Anyone who buys white furniture deserves what they get.) If you're really serious about your tiki-ness, serve your kids smoothies in tiki tumblers. Da-da has several. 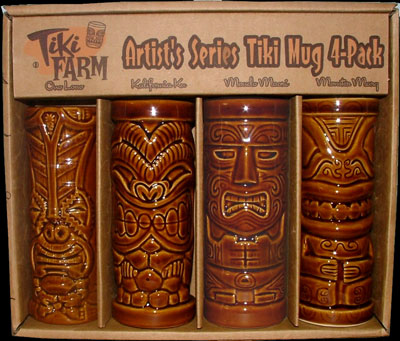 Note: monsters also hate Martin Denny music. Interestingly enough, anyone who listens to '50s techno-polynesian music and hates it is probably a monster and should be caged, or at least forced to hang out at The Pineapple Parlor for an indefinite period with some meddling kids. Jinkies. 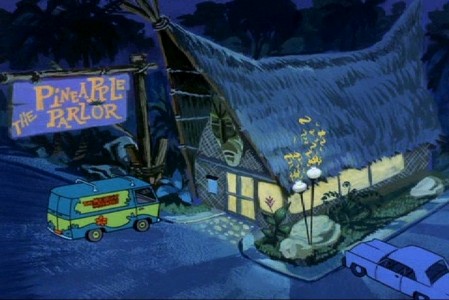 And just to prove that Da-da really does VIVE this muchacho blog, here's his pueblo's parlor (below). Verdad? No, VERDA-DA. Ack, Da-da's presence has just been alerted to the Party Police for mixing cultural thingies, again. The tiki streamers reeeeeaallly do keep away monsters, but strangely attact drunken Rotarians, go figure. Oh well, another Mai Tai, Chester? Tad?