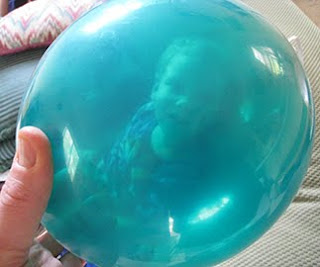 i've finally learned to encase my children (at least the younger one) into kubrickian star-child bubbles. why? am i some kind of monster? well, YES, but that's beside the point. it's really so they can float around and make wonderful things happen. or failing that, at least scare state troopers and clergy toward unorganized religion.

at least i can grab and POP mine if i wanna.

BUT, alas... the eldritch glow and unbelievable power of my patented, otherworldly spiritual advancement lasts just so long: 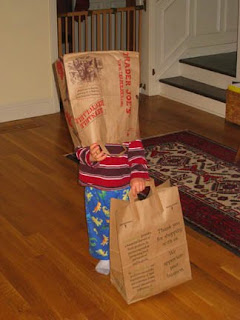 back to the state college track.
Inflicted by A Man Called Da-da 0 comments

Why This Blog is Entitled, "TRIUMPH of A Man Called Da-da" 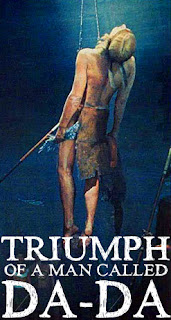 Someone who looked like the Ninth Dr. Who once asked Da-da why this blog is entitled, "Triumph of a Man Called Da-da."

First off, it's pronounced, "DAA-DAA." It's what Da-da's been hearing for a decade, so he responds to it. He's forgotten his own name.

Second, Da-da informed the inquirer, a young and unmarried, non-child-laden, early-release scaled model of Hugh Hefner, that the title on his business card is, "DA-DA," CEO to the small, the loud, the diaper-challenged. You've heard women say -- and Da-da will affirm -- that it's The Hardest Job in the World. It's also The Best Job... and the The Worst Job. Basically, it's somewhere between Christmas and a trip to the Emergency Room.

Third, and most importantly: Da-da is YOUR Da-da. He is, in plain fact, a kind of Meta-Da-da: parent to those who need one; leader of those who need one; student and educator of all; asker of difficult questions; truthsifter and speaker of unspeakable truths; and general naked-emperor pointer-outer.

Da-da does this free of charge.

And YES, Da-da talks and writes in the Third Person, since Da-da has lost a couple Persons in this da-da dada transition. It happens. And YES, da-da is also dada, each indistinguishable from the other.

Being a parent is like that every single day... at least for Da-da.

Anyone who tells you different is rich and has 10 helpers. Or is selling something. Or is a Divine Being.

In truth, EVERY DAY you survive as a parent is a minor triumph. Every day you advance the tribe one step UP the near-infinite staircase of truth is a major triumph. 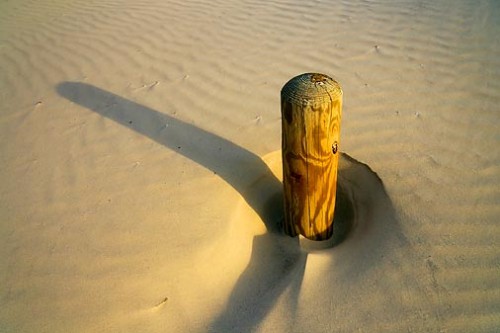 The Week That Was (and Hopefully Will Never Be Again) 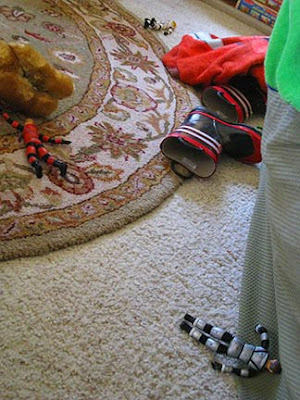 besides the impromptu, glowing green one-meter meteor that imploded over iowa (sending middle american 2012-ers scurrying for those tres soigne underground timeshares), our own domicile saw its share of Irwin Allen Lost-in-Space disasters.

notable casualty was Major Matt Mason, who bought the farm with extreme prejudice... 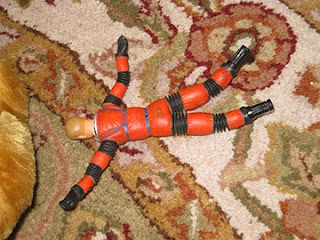 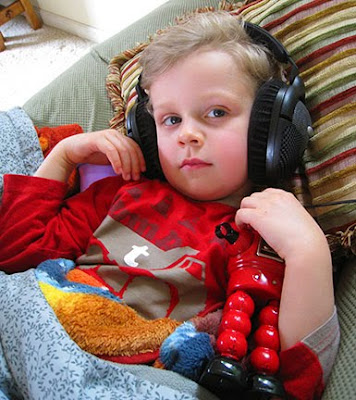 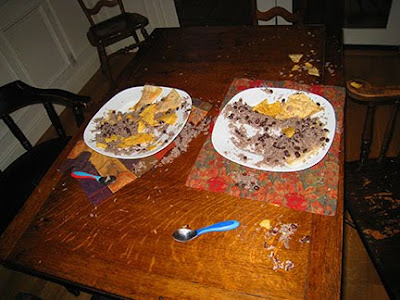 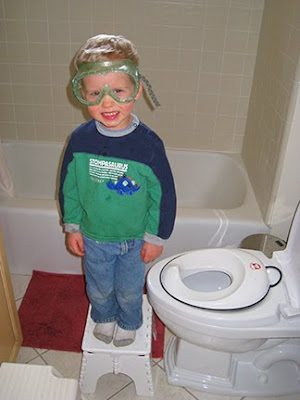 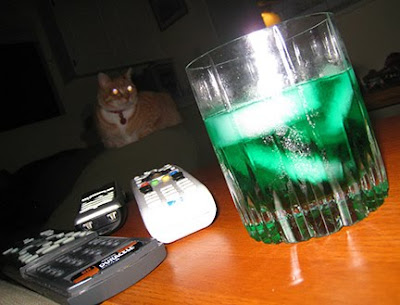 ...your basic 1974 Old Fedcal green-shagged Boba Fet creme de menthe down-spiral into a spooky and glowing cat-eyed friday retrospective. phew. if you only knew, citizens. put that into your SEO and smoke it.
Inflicted by A Man Called Da-da 2 comments

A Short Series of Unexplained Events 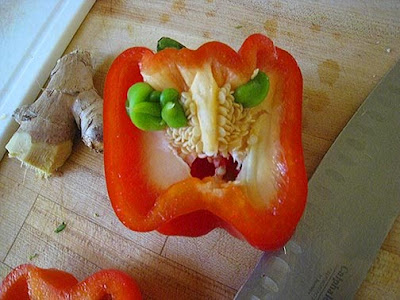 Ok, this happened -- AGAIN. Da-da sacrificed yet another bizarro, possessed veggie fresh from the Field of Screams at Monsanto, and somehow unleashed a string of (hopefully unrelated) bizarro events.

His boys ingested a (very small) portion of said pepper and got all wacky and giggly and genetically predisposed toward wacky and giggly behavior. (It was the pepper, Maurice.) And as they melded their illusory selves with the FrankenVeggie in gastric attendance, we were suddenly invaded by orbs, TWICE... 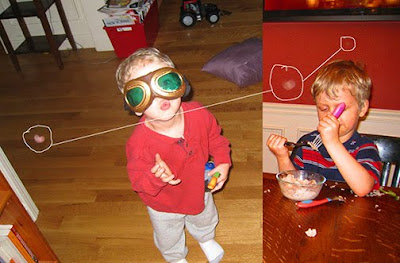 ...along with these weird, floaty lines of errant, shaky illustration. Then...

...a furry orange BLANCMANGE teleplasmed in from an adjacent tachyon reality: 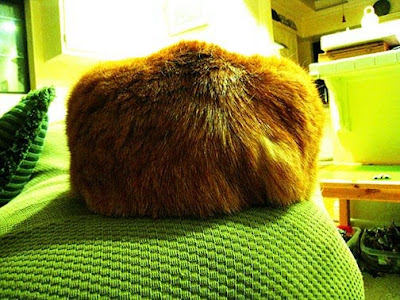 Da-da isn't sure what all this heralds, but whatever it is, he's sure it'll be entertaining.
Inflicted by A Man Called Da-da 0 comments 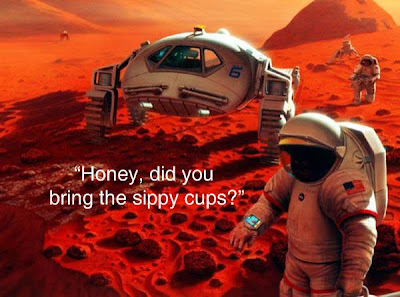 Ahh, you gotta love science. The European Space Agency (ESA) recently announced they'd be locking French, Belgian, Russian and Chinese volunteers (all men) into a big can for 520 days, to practice for a future mars mission. Here's the gist:


Four Europeans vying to become guinea pigs for a 520-day simulated mission to Mars say they are proud to be putting their lives on hold for the sake of scientific advancement.
"I want to help humanity take a step forward by improving our level of knowledge," Belgian candidate Jerome Clevers, 28, said.
Diego Urbina, 26, of Italy added: "When the first humans step on Mars, I can say, 'Yeah, I helped do that.' And then we get to use cool space suits, which is also nice!"
Two of the four, who also include Romain Charles, 30, and Arc'hanmael Gaillard, 34, both of France, will take part in a biomedical experiment starting this summer with three Russians and a Chinese participant in what the ESA has termed "second to none as the ultimate test of human endurance."

these poor schmoes will be locked up at the Russian Institute of Biomedical Problems in Moscow (sounds like fun, huh?)...


"...in an elaborate reconstruction that will include an interplanetary spaceship, a Mars lander and a Martian landscape."
The experiment seeks to test the group's mental and physical ability to cope with living and working in an enclosed environment for an extended period of time.
"There will be no women," Urbina added.

anyway, what are these poor fools really gearing up for? yes, it's parenthood! i've been cooped up inside the same building with spotty internet connectivity and little contact with the outside world FOR FIVE YEARS. and while there is indeed one woman, she's pretty cranky most of the time because of the two miniature mental patients we're also locked up with. so, NASA and ESA take note: in planning future missions, just send parents. PARENTHOOD is second to none as the ultimate test of human endurance. you read it here, first. 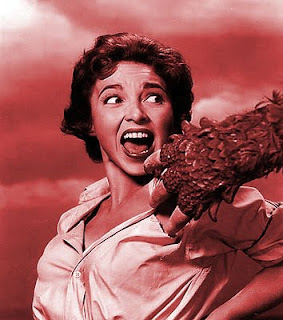