The Once & Future Submerged Dada 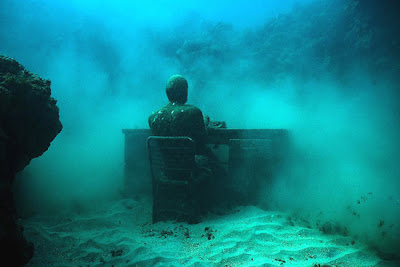 Someone finally opened a museum -- underwater -- memorializing my days in Discorporate America. See it here. You can still see me playing Solitaire...
Inflicted by A Man Called Da-da 0 comments 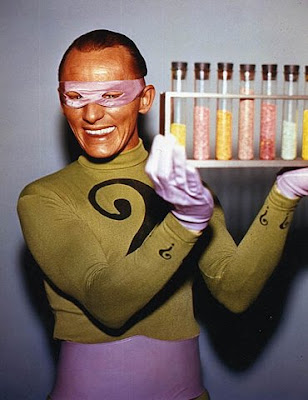 While I dislike "rules" as a rule -- and preambles -- they're often necessary both as a frame of reference and when you're trying to make fun of something in this, Our Lady of Post-postmodern Epics of Epicacity.

So what? So, it's Memorial Day, yay, which I won't make fun of, but all the war movies on TCM sure do get old, as does war, HELLO? but what Memorial Day really needs is a new run-sentence set of Potluck Rules. It's unavoidable. Like the rules of grammar, I keep trying to dodge them, but they KEEP PULLING ME BACK IN.

Dada's Potluck Rule #1: Bring something really good that YOU like, and hopefully made yourself. Why? Because everything at the potluck might consist of Thousand Year Old Egg and Pickled Belut. But that's ok. You brought 400 lbs. of Dada's Yummy Triumph Pasta Salad. Pasta salad? you say. Yes, Maurice. A blown, threatened palate takes great solace in a giant bowl of overly creamy right-handed celery-seed-laden pasta helices.

Dada's Potluck Rule #2: Don't pick your nose -- esp. if you're wearing white gloves. And avoid crowns in everything. 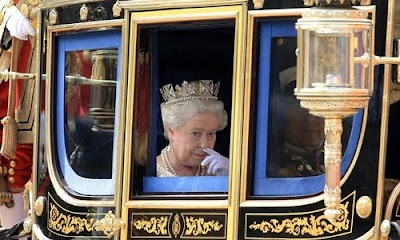 Dada's Potluck Rule #3: LET THE CAT BRING THE WATERMELON. Actually, when the cat's in a mood, let him do whatever he wants. Like you could stop him. 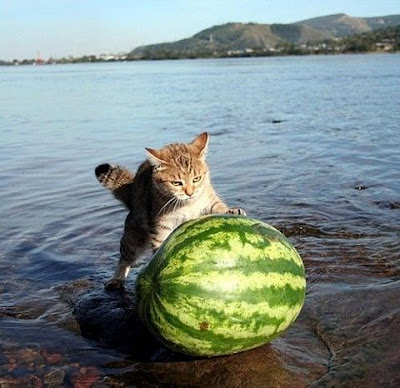 There'll be more rules later as I think of them, but I have to cut this short: I have to find my white gloves and air the carriage out for tonight's potluck. "Honey, where's my Chain of Office?"
Inflicted by A Man Called Da-da 0 comments 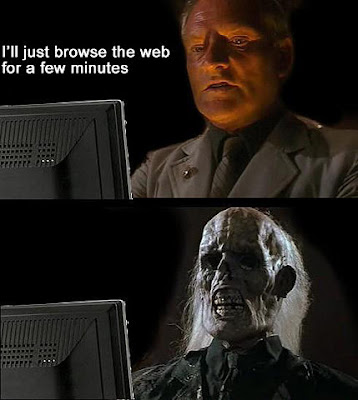 Wurfing? Yes, wurfing. "Web surfing" sounds so lame that a neologism is needed to make communication BETTER and easier and more complicatedly apres-post-moderne. So wurfing. Anyway, wurfing (an admittedly dumb word) is ostensibly bad and turns you into a mushroom, despite this snippet-gist:


During the winter of 2007, a UCLA professor of psychiatry named Gary Small recruited six volunteers—three experienced Web surfers and three novices—for a study on brain activity. He gave each a pair of goggles onto which Web pages could be projected. Then he slid his subjects, one by one, into the cylinder of a whole-brain magnetic resonance imager and told them to start searching the Internet. As they used a handheld keypad to Google various preselected topics—the nutritional benefits of chocolate, vacationing in the Galapagos Islands, buying a new car—the MRI scanned their brains for areas of high activation, indicated by increases in blood flow.

This makes me feel so much better at my abandoning Facebook and Twitter. I am superior. I am CAPITALIZING. I am annoying and will shut up. Happy Friday.
Inflicted by A Man Called Da-da 0 comments 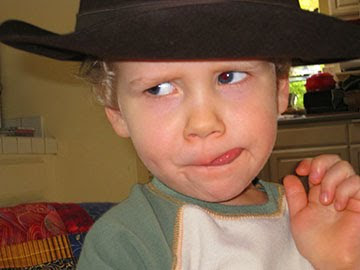 Da-da's youngest, Bronko (the poster child for CUTELITTLEBASTID.COM), comes to Da-da this morning and says, "we're making a MOVIE, dada! a SHIP MOVIE!" Da-da said that's great, commodore, can he help? "NO! it's OUR movie!" he then informed Da-da that he could help a little, but only if he and his brother retained full creative control and FINAL CUT. Then, Da-da's youngest sent in his ENFORCER, Nagurski, fresh from Naked Ninja School, to ensure that Da-da knew his role -- and his place. 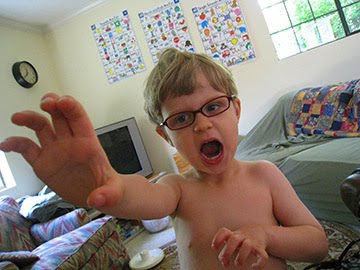 Da-da proceeded to the galley to facilitate in the way he knows best: making chocolate chip cookies. Here's the inevitable dough log (Da-da keeps it in the fridge and bakes 'em as he needs 'em). 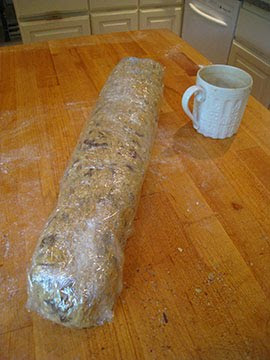 Yeah, that's some log, Horatio, he said, ducking punch lines. But, as feckless studio head and chief swabo (ah, a small naval joke), what else is Da-da good for but keeping the crew happy?


So, Bronko got to work on the script... 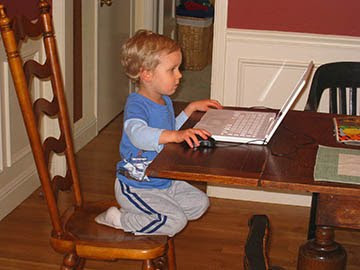 ...while Nagurski got ready for his close-up. 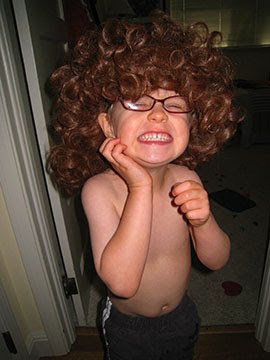 NOTE: this was BEFORE the cookies. EXEC PRODUCER'S NOTE: it pays to keep the talent happy or they can turn on you.
Inflicted by A Man Called Da-da 0 comments 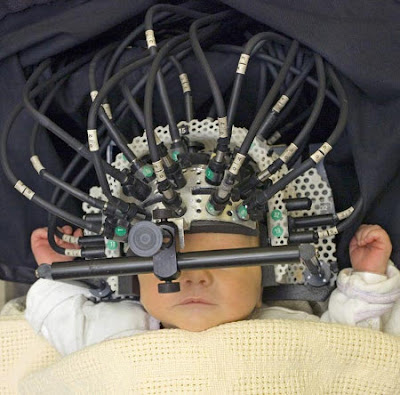 Turns out that scientists "recruited" (good Nazi word) 1- and 2-day-old infants to see if they could spend all their grant money by bugging babies, presumably to see if we can make children learn the split-second they arrive. Why should you get some slack, Timmy? What, were you born yesterday? WELL, GET TO WORK. YOUR ONE-YEAR-OLD TEST SCORES NEED TO BE HIGHER. WE WORK HARD AT THIS LEVEL, SON.

just you try electroding my NINJA PRE-SCHOOLERS, science-boy. good luck. we're all counting on you. 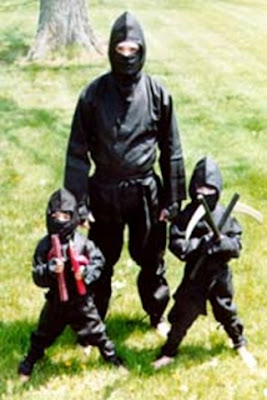 Labels: baby science, bizarre, experimenting on babies, get that thing off my baby, parenting, parenting humor, silly
Email ThisBlogThis!Share to TwitterShare to FacebookShare to Pinterest

"remember, guys... it's mother's day, so PLEAAASE HANG UP THE CAT AFTER YOU'RE DONE." 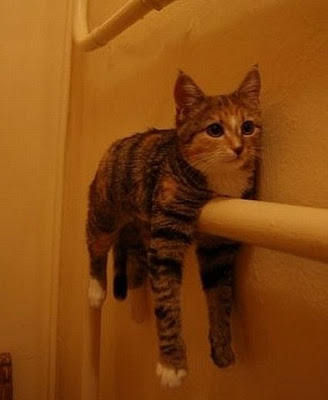 Labels: bizarre, cat humor, mother's day humor, no cats were harmed during the course of this blog, parenting, parenting humor, silly
Email ThisBlogThis!Share to TwitterShare to FacebookShare to Pinterest

Of Lizard Parking, Orb Routing, and Why Leon Isn't Helping

i don't know why, but friday is ostensibly the day when the weird and the interesting train-wreck in noodle-y, steel-ribboned heaps. to whit:

this morning, the BOSS (my wife, not Bruce Springsteen; that's such a whole other blog) loudly announced to my youngest and oldest (they have no names, we just call them OLDEST, YOUNGEST or DAMMIT) as they ran amok in a saurian frenzy instead of eating breakfast, that it was time to, "PARK YOUR LIZARDS." i even wrote it down, as i have no memory anymore, though i only managed to capture half of the lizards being gamboled about (officially, there were 11 lizards participating, not including me, but five wound up behind the TV): 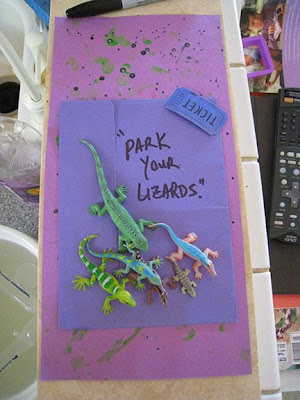 then, after Les Deux Magot-lézards'
petit déjeuner, my youngest becomes hell-bent on embodying the Physical and Transport Layers by routing two enormous red and purple packets (played by beanbag chairs) through the kitchen and onto my boots, by way of the Infotainment Stuporhighway: 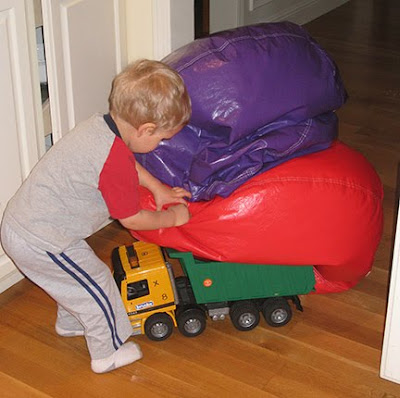 while reviewing these shots, i saw yet another in a long line of ORBAGE that follows my youngest everywhere: 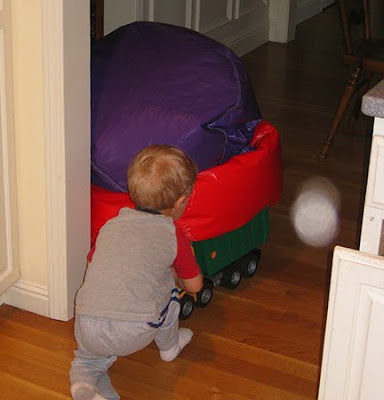 they're in every other shot. what can i say? orbs love him. here's another from his recent b-day: 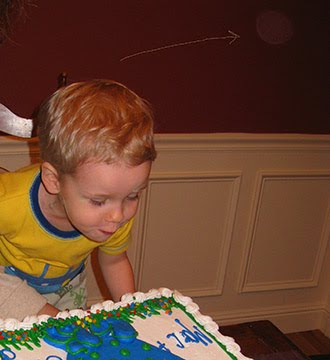 anyway, later in the day, as deafness and orb possession seized both my children -- as they're wont to do on fridays -- i actually got to quote "BLADERUNNER" to my unsuspecting audience:


DADA [to oldest]: "Your brother is helping clean up those blocks, why aren't you?"
OLDEST: "What do you mean I'm not helping?!"
DADA: "I mean you're not helping. Why is that, Leon?"

and for whatever DNA-entwined, psychic phlogistoni-sympatico geek-reason, both boys and i started laughing -- probably because they think Leon is a funny name, though i was laughing for a different reason. inspired, i pulled out my "FINAL FINAL DIRECTOR'S CUT FINAL" of said film and showed the boys a snippet of the Leon scene:

then were were all laughing again. even the orbs were giggling. so, to commemorate this warmly psychic family moment (WPFM), and cap off Yet Another Bizarro Day in the Haunted Monkey Cage (YABDitHMC), i made a new shirt: 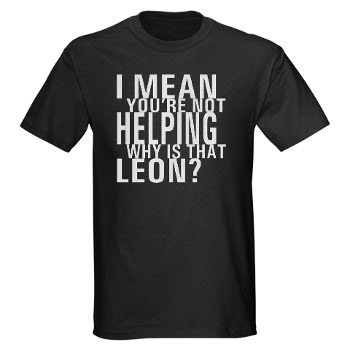 the orbs said for you to buy ten. EACH. don't mess with the orbs, leon. they know when you're not helping.
Inflicted by A Man Called Da-da 2 comments