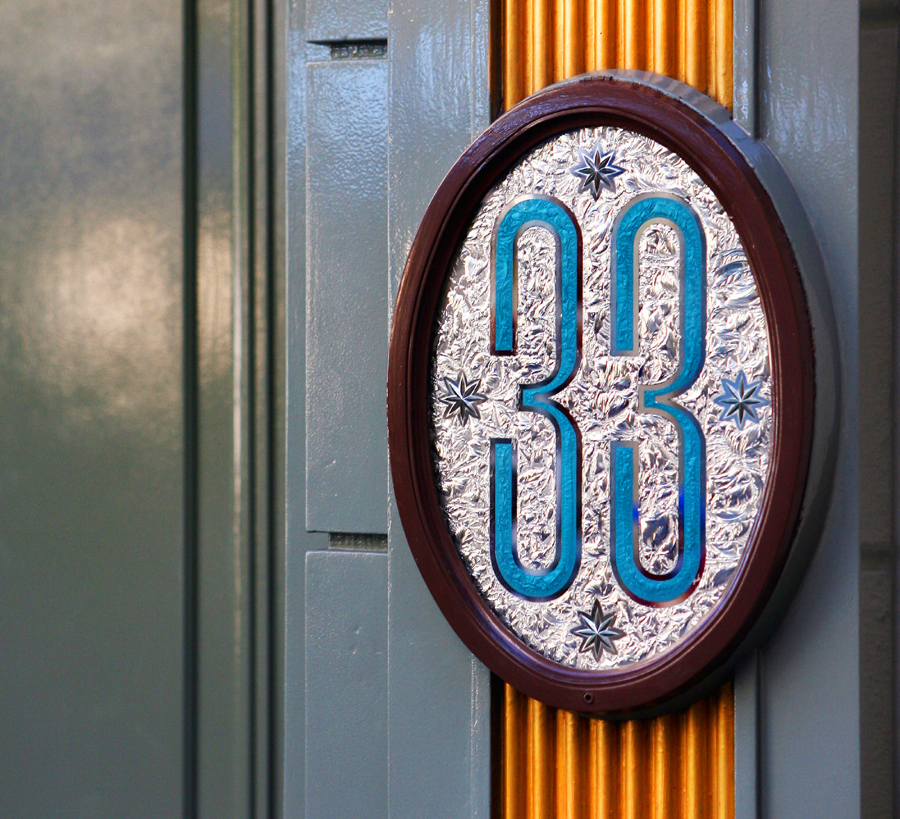 Da-da was going to write a big long piece on secret societies' symbols and influence at Disneyland... but really, who cares? Their secrets are rather pathetic. And old. Obsolete. It's just bad programming. A bad mental software routine that's been hogging existential bandwidth for eons. Sure, their crimes are legion, but we're bigger than that. We don't need to seek revenge on our former masters, who are in actuality also our spiritual brothers. They'll punish themselves worse than anything you could do. And we can be generous now that we have the keys to our cells in our hands.

So. Let's reboot. It's time we all put away our fears and got together and got along -- and got those who don't deserve to govern us out of the way so we can vive, muchachos. How difficult does existence have to be, anyway? Not that difficult.

Take the day off. Be good to yourself. Breathe. Look at the sky. Walk a little taller, and enjoy a positive mindset... 'cause good things are coming your way. Really good things. You won't believe how good. And Da-da's not just saying that.

Hope is the best of things. Without it, we're all just mass without gravity.

Release the Unicorn... From Atop Da-da's Minivan 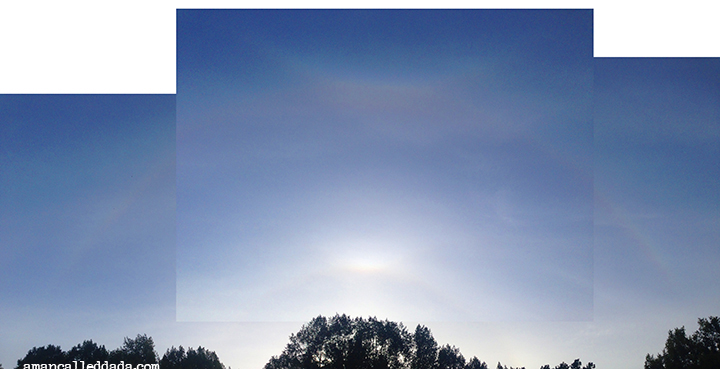 This appeared over a town in Northern CA that Da-da was visiting. (Pardon the bad stitch job, Da-da only had his phone camera, which is limited.) It's the warmer-climate, sunset-version of this recent sunrise pic from frosty New Mexico: 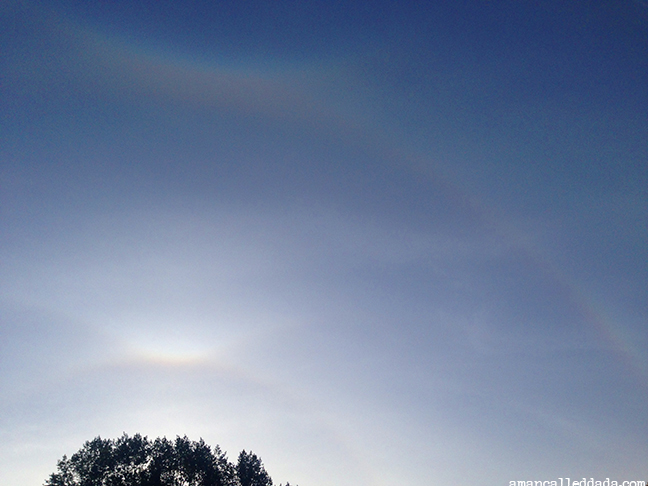 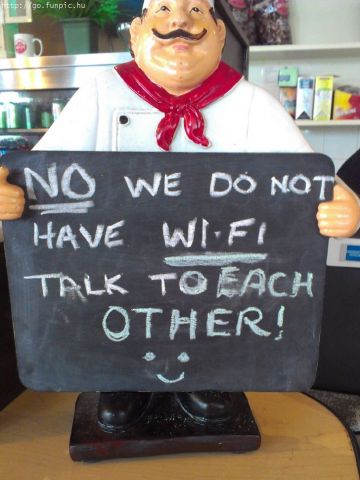 According to Psychic Lynn, she saw these stones used by GIANTS in a terrible game long ago:

"They were projectiles AND part of a game. Giant people, at least 7 feet tall and enormous, are throwing these balls at each other, trying to hit and hurt each other. It looks to be a malicious form of dodgeball, like shotput, dodgeball and tennis all in one, designed to cause harm to the other person. Your goal was to disable your opponents, and it would go one for an hour or more."

No wonder the giants died out. The best is the photo/caption at the bottom. 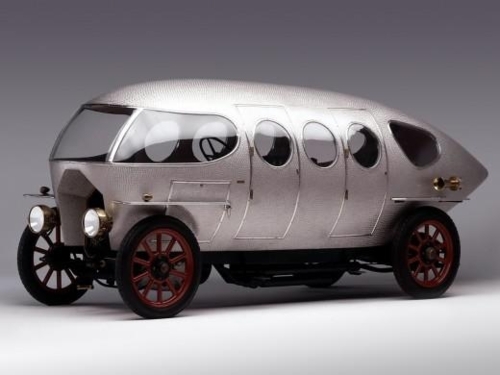 It's cliche, alas. But some cliches, in rare circumstances... well, sometimes their use is warranted. Yes, Da-da is talking about Kid Transport Vehicles (or KTVs).

KTVs are different than any other vehicle, excepting maybe dumptrucks. They must do certain things well, while tolerating the occasional saltwater hosedown of the interior. And YES, Da-da had to buy one, as his monkeys were exceeding the design limits of both his modest 14YO Jeep, and Ma-ma's micro-hatchback.

Like everything else in manly life these days... oh wait, there isn't any manly life these days. Ma-mas win that particular contest. So, Ma-ma got Da-da's Jeep (and is very very happy). The hatchback, which had tremendous resale value, got sold (only lost $3000 off the purchase price, wow). And with that, Da-da got neutered.

Of course, Da-da has no trouble with bludgeoning traditional male/female roles, having lost all sense of... well, all sense of everything since becoming a SAHD. NO, Da-da doesn't embrace this touchy-feelie role; like a man, he endures it, a quality made famous by women. BUT Da-da still retains a stubborn inner DrWhovian OVERCAPITALIZATION manticore that will have its day. Or at least, its mid-late-early morning afternoon. Besides, it's a serious challenge.

Up on the block, the usual suspects: THE MINIVANS. They're not mini. They're not vans. They're not affordable. Da-da's not gonna show pics; you know what they look like. Above all, they're g*ddamn pricey -- SO pricey in fact that they were unobtainable unless you wanted to french kiss a corporate bankster on the mouth every day for 2191.5 days.

That said, Da-da decided to go the Top Gear Extremely Cheap Minivan People Transporter Challenge. COULD he purchase a vehicle that met all the pre-existing needs AND was comfortable and perhaps just a little fun? Yes, he could. And did. But it came at a price, and he's getting ahead of himself.

One direction Da-da would LOVE to go is the bike route. But it's just not safe as a KTV, as drivers in huge trucks and Escaladezillas and police cars rocket about Da-da's town while staring at their g*ddamn smartphones. Has everyone been raised an idiot these days? Is that even a sentence? Anyway, while Bronko and Nagurski and Da-da are indeed tough and feisty and fairly intelligent (well, *they* are)... do the math: a five-ton SUV goes over a 30-pound bike with nothing leftover.

If Da-da lived in a civilized country, he'd ride one of these: 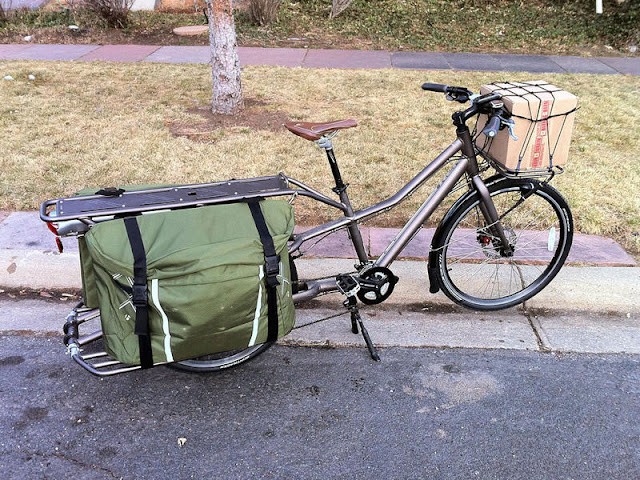 It's a Trek Transport+. It's also electric-assist, so all those groceries and cinder blocks aren't quite so heavy. It is awesome. It is also totally devoid of armor and airbags and all the other things Da-da would need to ensure his genepool's survival -- which is highly overrated, just ask anyone from Monsanto.

The Part Where Da-da's Fate is Sealed

Ok. So, Da-da found a vehicle.

One day, Da-da's across-the-street neighbor George, a nice guy and recovering bass player who used to own a music shop (the real kind, that sold instruments), walks over and offers Da-da first dibs on his 2002 Chrysler Town and Country Minivan. For $1000. George tossed Da-da the keys and said, "Drive it around. See if you like it."

Da-da drove the minivan around. It was ok. Kinda squishy. But had a better ride in comparion with the bouncy jeep. AND it had the old side-rear windows that servo OPEN/CLOSE, allowing copious amounts of fresh air to course through the cabin. Da-da is all about fresh air. It had no mats or stereo to speak of, but it did have AC (that didn't work). It was clean. And a responsible jazz musician had put all 171,000 miles on it, and took care of the engine. Some of the clear coat was coming off, but that wrench could be monkeyed. 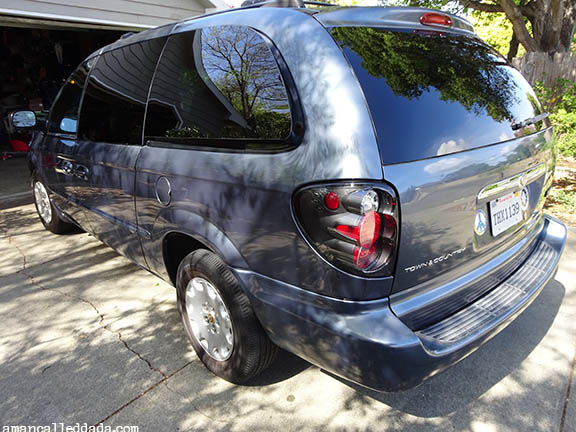 The Part Where Da-da Loses His Soul... or Gets It Back, One of Those

Yes, Da-da bought it. He added a new stereo. Some nice thick carpetted mats. Spent $400 to have the AC fixed. Since George had just bought new headlights, Da-da purchased aftermarket rear lamps, as well as new (stock) wheelcovers. It almost looked presentable. (Then he spent $1500 a week later when the clutch exploded, but this was his fault for doing things like coasting downhill in neutral and popping it back into DRIVE, which brings us to Life Lesson #23972: if you buy an old vehicle, drive it the way it's been driven; any deviations will be costly.) 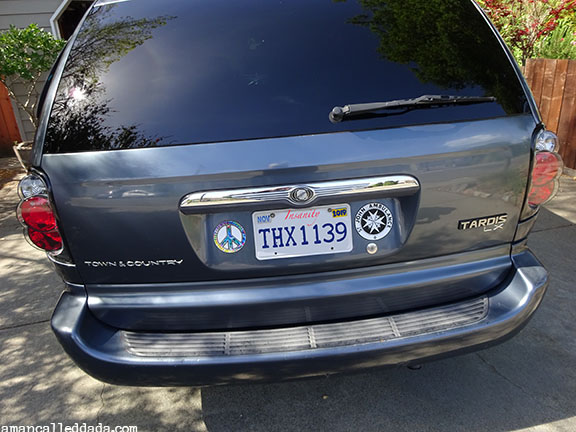 It had to have a peace sticker, a better license plate -- and especially a St. John's Ambulance sticker when Da-da realized what he'd actually bought a... 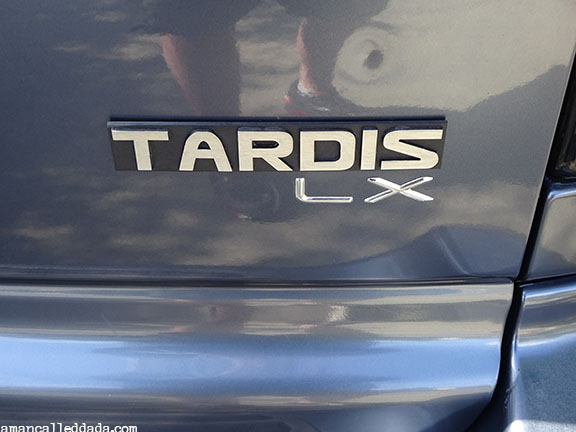 That's right. It's a Chrysler Town & Country TARDIS LX. Not many of those around. Not sure how Chrysler swung a TARDIS. Must be an import.

Bottom line: Da-da's boys immediately loved it. Climbed all over the seats and threw things at each other and were basically the highly enlightened primates they are, even after we got trapped in lava on Gallifrey. Hey, if you can't have fun while serving the needs of others, don't do it.

[Note: YES, Da-da put the TARDIS badge on it, too. Life can be amazing, but sometimes it needs a little OOMPH.]

Clearly, one of the micro-STIGs is still not convinced. 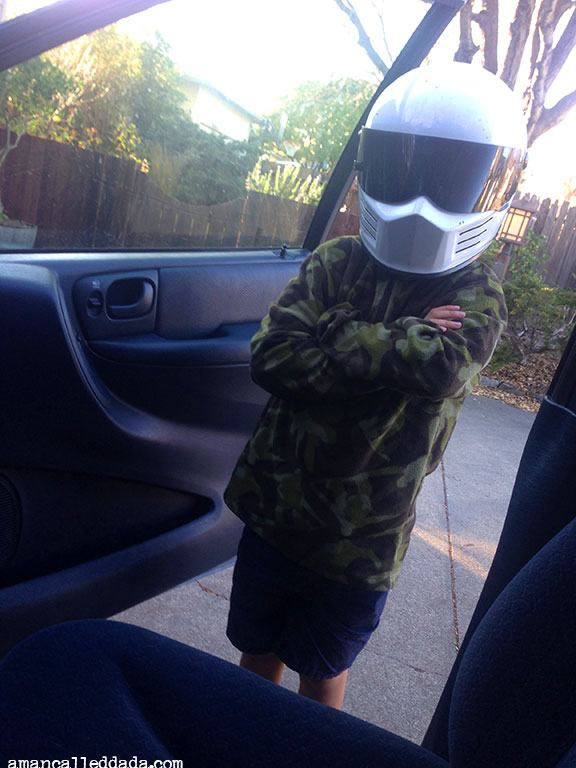 The Flow With the Go: Your Front-end Realignment


Ok, Da-da better understands this now. It's some kind of realignment. For those who know what Da-da's talking about...

When you hear "the beacon," or that sudden ringing in your ears, or experience any kind of mental pressure, or an urge to meditate, try this easy set of steps. Da-da's had this happen twice now, and this is what he did. Seems to work. It even worked on Da-da's wife, and she's a bit of a skeptic. Don't ask him what all this means. Note that this might happen more than once over the next four or five days, so you might need to do it more than once.

Note: Most know this already, but chakras, or power centers, really do exist, mirroring the body's endochrine system, and run along rainbow lines: ROY G BIV. Red Orange Yellow Green Blue Indigo Violet. They run all the way through the body, front to back, and spin... in some way, but don't get hung-up on forms.

That's it. From what Da-da can tell, this is some kind of spiritual realignment, but Da-da can't tell you what it means, yet. He doesn't normally post stuff that's this out-there, but it's happening more and more... and since he was directed to, he's just gonna go with it. 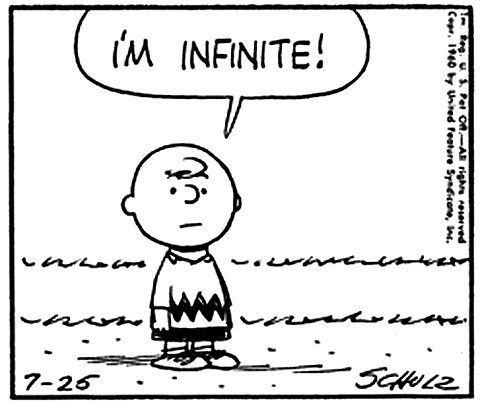