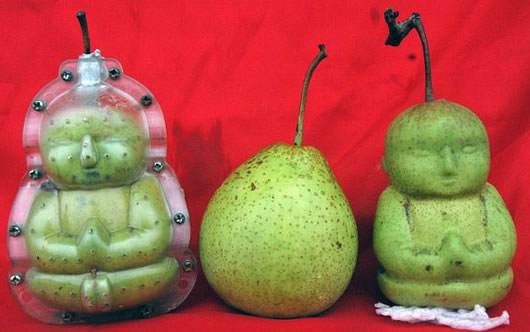 As chef, (Ma-ma doesn't cook much), Da-da's boys' meals are all about experimentation, which basically equates to him making about ten things until he finds one thing they'll actually eat. Da-da's less flexible during the week, but on Saturdays, Da-da doesn't mind cranking out small plates of ethnic brio, as this keeps cooking chops fresh and springy -- AND paves the road toward future palates of open-roadiness. This is Da-da's theory, anyway. For all he knows, his boys will end up making chili cheese burgers at Ed's Atomic Burger and Discount Crematorium

Saturday's breakfast involved (at the oldest boy's request) breakfast burritos: roasted and buttered wheat flour tortillas filled with warm refried beans, crumbled bacon, a layer of scrambled eggs, potatoes o'brien, cheddar and scallions. Sides: strawberries and blueberries. Result? Lots of staring. They wouldn't even TRY it. Da-da's oldest (with his odd, occasional Bavarian accent) finally said: "No Da-da. Dis sucks." Why did Da-da have kids again? Da-da reminded his boys that that isn't a nice thing to say and downshifted their burritos to eggs and tortillas. Da-da's wife, Ma-ma, offers the brutes fruit bars and yogurt as a last resort. Result: no actual food is eaten -- at least not by children.

After powerful salt water hosedowns flush the crime scene, Da-da's lovely wife takes the boys to the park, while Da-da jaunts off to Whole Paycheck with (worthless) Swedish au pair, Inge. She's only been here a week and is still not allowed to drive or do... anything... so, Da-da does his bit at showing her around.

At the store, Da-da sees what looks good and begins the painful task of conjuring lunch and dinner menus for the next few days. Sleep-deprived, he has very little creativity left in his wolverine. And there, hip-deep in overpriced produce tuilleries, a matronly woman takes in Da-da's hole-y tie-dye shirt and shorts and sandals and beard and asks him where the kiwis are.

"They're behind you, but they're overpriced."

Her eyebrows rise and she wonders aloud that the prices must indeed be high if the employees are commenting on them. Da-da lets her know that he doesn't work for Whole Paycheck, and she laughs.

"Oh! I thought you were the manager! You looked so... in charge!"

In a tie-dye shirt?

"And you and your wife are so cute together!"

Inge giggles and Da-da informs her that she's our au pair, and she's a lot more expensive than the kiwis, but only slightly less hairy. Maybe Da-da thought that last bit.

"So nice of her to do double duty!" the matron trills and Inge giggles again. What?

While Da-da's trying to figure out what just what THAT means, she adds:

"Oh! You could be brother and sister!"

Jeez, just shut up and go away. Da-da may have said that out loud.

Afterward, Da-da's forced to quell Inge's fears that she looks old (she's 20, but the handlebar mustache makes her look older), while he windowshops the fish case... but eevrything looks too expensive. On the ride home, Inge inspects her face for wrinkles in the minivan's vanity mirror while Da-da can feel his own edge past 90.

After Da-da gets home and unloads the groceries (Inge doesn't carry a thing), he works on the boys' lunches, a United Nations of dishes:
Ok, Da-da didn't PLAN to make all that. He started with the cucumber sandwiches, as they're the epitome of mild... and his boys flatly refused. Jeez, Da-da even cut them into cute triangles. And sure the sushi was a longshot, but the fruit was good and simple and... untouched. Even the baguette got snubbed.

The meal ends when Nagurski, Da-da's oldest, loudly proclaims that there's a raccoon in Ma-ma's shirt. A student of the unusual, Da-da looks... gasps and SCREAMS as the raccoon wiggles, but it's life is owed to Bronko, Da-da's youngest, piloting a raccoon puppet. Inge, for the record, locked herself in the bathroom and ate nothing.
Inflicted by A Man Called Da-da 0 comments