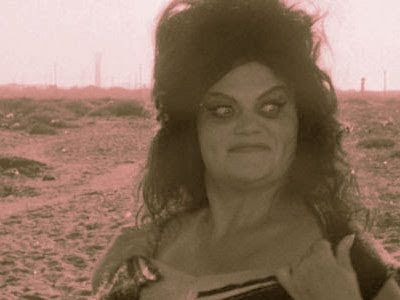 You know what gets Da-da hot? Like you care, but he'll tell you. It's someone's (anyone's) 85YO Sicilian grandma, with a lifetime's worth of incredible recipes and REALLY THICK WRISTS, so she can make pasta and knead bread and strangle Nazi generals for hours and never get tired. One who can keep you in line, buster, while jollying 15 young children into doing her bidding -- cheerfully, with love and aplomb -- and make a 12-course dinner from nothing but flour and a few inedible plants. THIS is a Supreme Being. And, as such, this is what Da-da dreams of: giving in to women who outrank him. Like his grandmas. And his mom. And his wife, yes dear. And because, let's face it, women are better at child-rearing than men. Most of them, anyway. And OLD SICILIAN GRANDMAS will kick everyones' ass all day every day. Jeez, there's a reason why the Nazis lost Sicily. Where was Da-da going with this?

Oh. One thing DREAM GRANDMAS used was... iron. Another reason for those thick wrists. She cooked with iron skillets, baby. Not wimpy copper core, stainless steel, teflon-coated, bad-for-the-environment blow-dried-show-dog marthastewartware (even though Martha Stewart is probably one mean-ass grandma). No, said senescent matriarchs used old fashioned iron skillets that you had to season yourself, not just unwrap from Sur la Table. And since it's unlikely that Da-da will bump into an elderly octogenarian matron fresh off the boat in his neck of the woods, he'll have to serve as his own Iron Grandma, which is admittedly a little weird, but the wig looks fabulous on Da-da.

Anyway, Da-da had been cooking with iron skillets for a long time, but after seeing a really big 20" monster pan in action at a friend's house, Da-da had to get his own. Here it is, unseasoned (next to his old 14" pan): 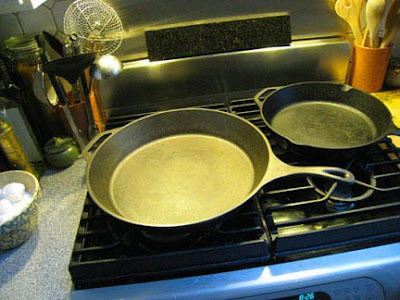 Aaaaaa -- and here it is three hours later after three seasoning passes: 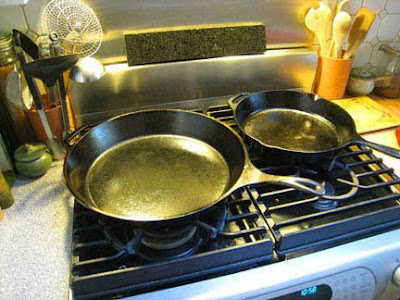 This might not seem all that exciting (unless you're queer for kitchen equipment), but check out the iron levels in food, before and after cooking in an iron skillet:

"Researchers found that cooking in an iron skillet greatly increases the iron content of many foods. Acidic foods that have a higher moisture content, such as applesauce and spaghetti sauce, absorbed the most iron. As a matter of fact, the big winners in the foods tested were these two items. For 100 grams of each (about 3 oz.), the applesauce increased in iron content from 0.35 mg. to 7.3 mg., and the spaghetti sauce jumped from 0.6 mg. to 5.7 mg. of iron.

Food cooked for longer periods of time absorbed more iron than food that was heated more quickly. They also found foods prepared with a newer iron skillet absorbed more iron than those cooked in an older one. Foods that were cooked and stirred more frequently absorbed a greater amount of iron as well, probably because they came into contact with the iron more often. Hamburger, corn tortillas, cornbread, and liver with onions didn't absorb as much iron. This was probably due to the shorter cooking times, and the fact that they were either turned once or not at all, resulting in less contact with the iron.

Here are the changes the researchers found. Foods cooked at home may vary in iron absorption based on the age of the skillet used and the amount of time the foods are heated. This list can give you a general idea of the difference in dietary iron content cooking in an iron skillet can provide.

So, if you're looking to increase your dietary iron, use a new cast iron skillet. After all, the iron in cookware is no different from the iron in our bodies — except we have much smaller amounts!"

Of course, this is nothing new. But since Da-da's last few posts were merely entertaining and overly autobiographical, he thought he'd throw in something that was actually useful -- like jacking up the iron in apple sauce. Yes, NUTRITION gets Da-da hot, too, but then again, he does own an accordion. In closing, here are some other tough-ass grandmas you need to make your life complete: 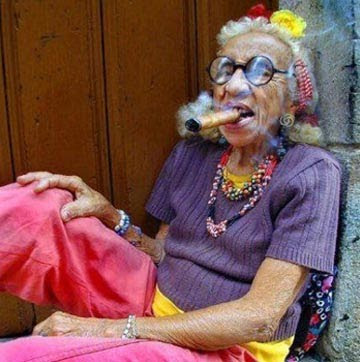 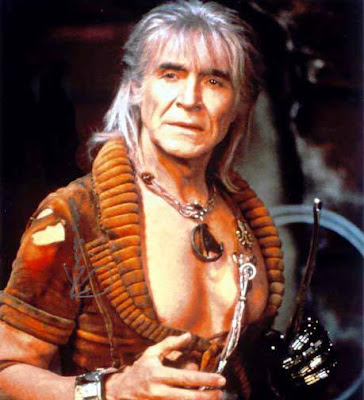 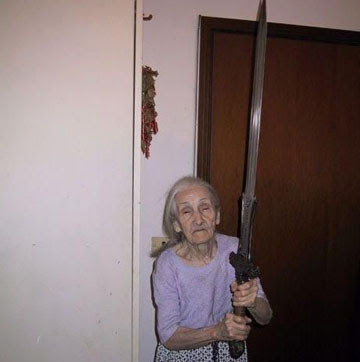 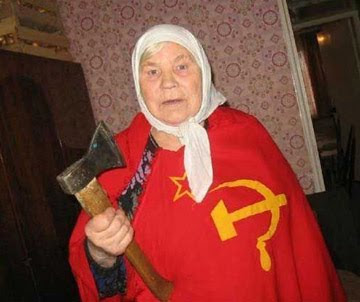 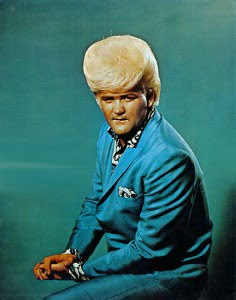 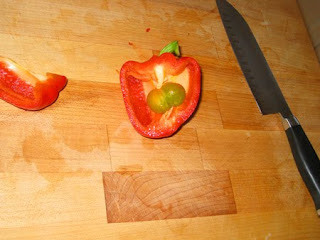 Da-da's not sure why -- or IF -- having children causes a large percentage of people to become... well, NUMB to just about everything that happens in the world. Speaking as one who discovered latent superhero BARF-CATCHING and ERRANT CAPITALIZING talent quite by accident (can you plan for such a thing?), Da-da must say that nothing fazes him after six years of being A Man Called Dada. So, when Da-da recently cut into a red pepper while making... something, he can't remember... he uncovered: pepper testicles.

It could be a rare two-chambered red-pepper heart lying next to Da-da's santoku, he's not sure: Da-da's only performed about 100,000 pepper-ectomies. But he can safely say that he's never seen such a pair on a vegetable this side of a Monsanto frankenfield. He did find quite a large... uh, protuberance... on a strawberry the other day, but Da-da doesn't think the two are related. The Monsanto Range Safety Recombination Facility, where Da-da gets his vegetables and fruit, was flabbergasted. "This is the first genetic anomaly we've ever heard of!" a clerk ululated, scratching his three small heads.

Oddly enough, Da-da has an applicable tangent to accompany the rampant Peter Piperage. If he may...

This same meal spawned a new drink -- which Da-da badly needed on a Friday after a rafter of Child Meal Insertion Debacles (CMIDs). He'd been working on a cobalt-free, "Dirty Gibson," for some time (with Hendrick's Gin, which has a certain taste that works with onions and veggies), when he added a robust jigger or three of Mr.and Mrs. T's Bold and Spicy Bloody Mary Mix, creating what he calls either, "That Time of the Month," or "Blood of the Vanquished." After Da-da's week, both were apt. 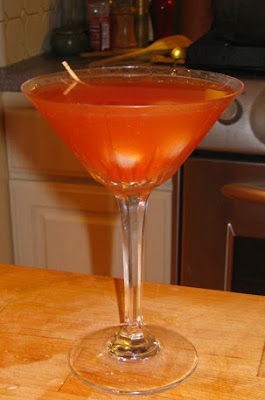 Add half a glass of ice to chilled pint glass. Drop vermouth and gin and lime and onion juice over ice. Top with bloody mary mix and taste. Cowboy up and sip some booze off the top if you need more bloody mary mix.  Drop the onions into a large, pre-chilled martini glass and whomp in the mixture. Don't be gentle. Yield: about two martini-glasses' worth. Garnish with the largest Monsanto red pepper testicles you can find and DRINK, DRINK LIKE THE WIND. Do this and you may actually survive a night of feeding two fickle 40-pound anthropomorphic pirahna. Oh, c'mon, where else can you get a drink recipe AND a genetic aberration?
Inflicted by A Man Called Da-da 4 comments

1. i've been thinking about capital letters and i've decided that, like any former old school systems guy, i don't like them unless they're absolutely necessary to the code.

2. i've decided that everyone loves stormtroopers in unsubconscious reaction to the pendular zeitgeist swinging all things shocktroopy since 2000. 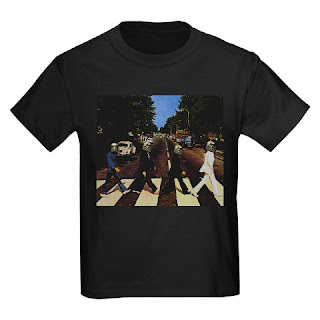 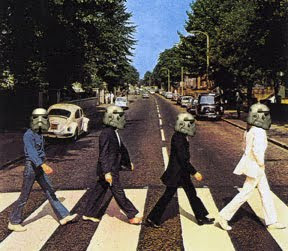 i also have them for adults and on a coffee cup, which is the OTHER thing everyone wants these days (material gratification, not coffee cups). note that this in no way violates anyone's copyright, as this is PARODY -- of The Beatles, of George Lucas and Star Wars, of all those folks who wear stormtrooper helmets to the grocery (like me), of Republicans and Republicrats and Demoplicans and their ilk. well, maybe. but what it REALLY is is an homage to my parents' old white VW bug, which looks EXACTLY like a stormtrooper helmet. Herbie!

get yours here. [NOTE: MY LAME-O PROVIDER HAS DECIDED THAT THIS ORIGINAL, PARODIC, TRANSFORMATIVE WORK VIOLATES COPYRIGHT, EVEN THOUGH IT DOESN'T. SO, YOU CAN'T BUY THE SHIRT ANYMORE. SORRY. -The Mgt. ]

(note: you all MUST KNOW that The Beatles were always saying, "BACK, rebel SCUM" well before it became dick cheney's nixonian mantra.)
Inflicted by A Man Called Da-da 0 comments