It's Int'l Cat Mustache Day (is, too) 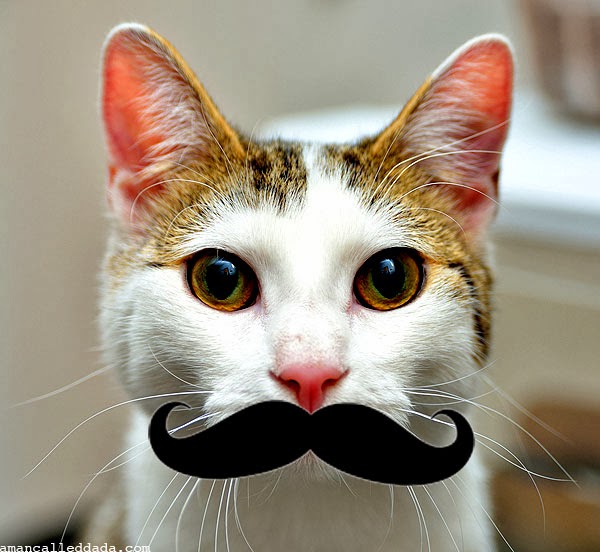 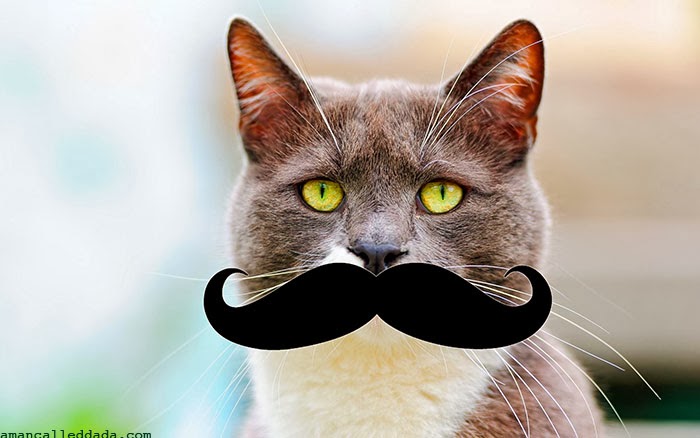 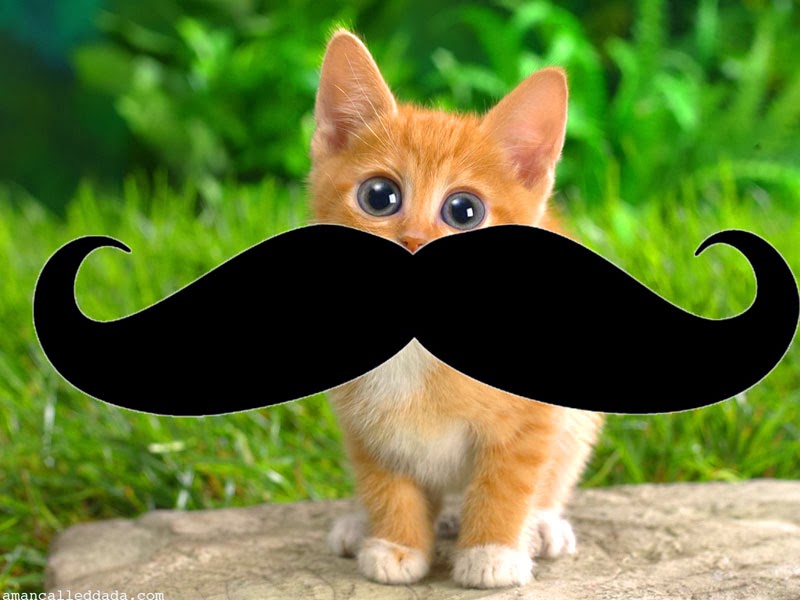 Can there be anything more wonderful than Int'l Cat Mustache Day?? No, there can't. Mustaches for all Da-da's anomalistic friends, cats or otherwise.
Inflicted by A Man Called Da-da 0 comments


Da-da's trying to WRITE over here, but things keep happening so he's forced back into the plastic tube for a moderately timely thing about... some other ellipsoidal... thing. What?

Da-da basically fell down in 2005 when he had his first kid (ok, someone else did all the growth and birthing, but Da-da had to comb his hair... while he still had it). And he was just starting to get up when the next kid came along in 2007 like a 40 lb. sack -- yes, a very cute sack -- of rabid weasels that just ate another 40 lbs of wienerschnitzel. (Um, that's 80 lbs. How's Da-da's math?)

It should thus come as no surprise that Da-da not only says things like "thus" all the time, but also got out of the habit of watching prime time anything. No prime time movies, no TV, a little Internet, some weird articles about perpetually blurry flying glowing-red-eye things in Pennsylvania that eat people... you know, a total pop blitz.

Da-da did not recognize a single celebrity name or movie.

He did recognize CONAN. He likes Conan, though he's seen him mostly online, enough to recognize that hair as being Da-da's hair that Conan seems to have stolen while Da-da slept. Nice move, commander. Da-da *did* understand the monologue jokes, as they were mostly knee-jerk (funny knee-jerk) off the wires and THE INFORMATION SUPERHIGHWAY. But the guest celebs... no idea. Their names and movies might as well have been in chinese.

What does this mean to you?

It means you are, right now, reading words written by the previously near-decade-unconscious DA-DA VAN WYNKLE. There, Da-da used his full name for the very first time.

This is not to be confused with dadavanwynkie. That's a totally other thing, a medical condition not to be made fun of; it's not nice to reference those poor unfortunates whose garage does NOT sport galactic hot dog and zucchini machinery. Nor should you mistake this post as issuing forth from Da-da Von Wynkie, the Austrian Spandex Pioneer and Sausage Enthusiast, not that there's anything wrong with that. And NO, not Wynkelhorn. Da-da always puts LACES OUT. Da-da lost his train of thought again, but who cares? Welcome! Jeez, now Da-da knows why politicians babble: not making any sense is so very very liberating.

Da-da's got a lot going on, so he's going to take a break from blogging for a while. Don't push any buttons while he's gone.

Labels: suddenly
Email ThisBlogThis!Share to TwitterShare to FacebookShare to Pinterest

Tuesday at The Non Sequitur 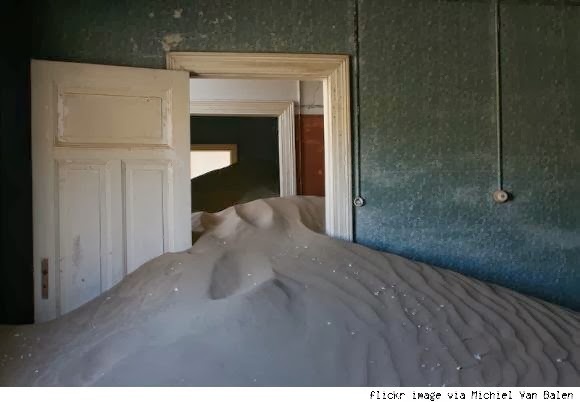 To keep children and older adults safe from falling -- and dramatically increase the amount of colories burned in moving from room to room -- Da-da just installed 160 cubic yards of designer sand in his house. Luckily, the house's titanium/spiral-foamed-polymer concrete foundation could accomodate the additional 416,000 lbs. (only 208 tons). The kids love it, and so do the cats. Big plus: it almost completely removes the need for furniture. The sand is sterile, so it only has to be replaced every ten years, given the volume. Biggest problem so far is keeping all the upstairs sand from cascading downstairs. All told, it's like inviting the beach indoors!
Inflicted by A Man Called Da-da 1 comments

Time to Play the Cat

Womb With a View 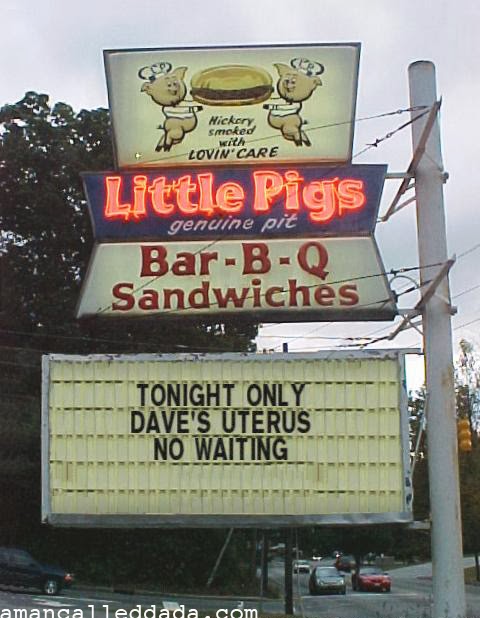 The Invisible Man Drives a Minivan

Wanna know what it's like to be Harry Potter beneath his invisibility cloak? Just be a SAHD Da-da driving an old minivan near any elementary school. Cloaksville. Last Train to Cloaksville?
Inflicted by A Man Called Da-da 0 comments

That SAHD Look of Parenthood

Labels: a HIDING of SAHDs, group of SAHDs, SAHD humor, That Look of Parenthood, triumph of a man called da-da
Email ThisBlogThis!Share to TwitterShare to FacebookShare to Pinterest

The Happiest Place on Earth 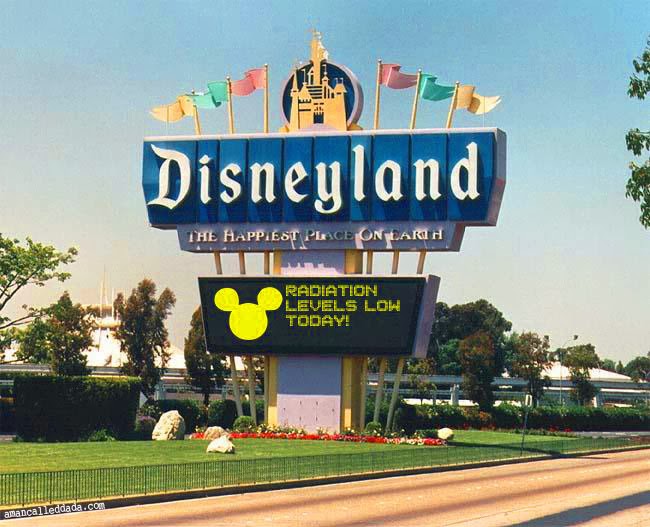 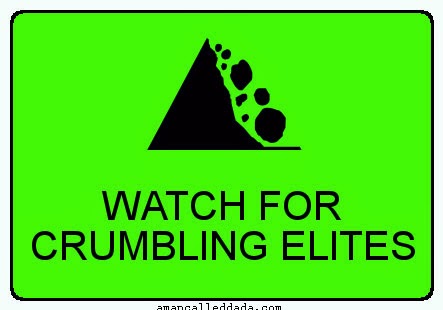 Labels: cabal, crumbling elites, regime change, the powers that were
Email ThisBlogThis!Share to TwitterShare to FacebookShare to Pinterest

The Six Looks of Fatherhood

Labels: Q, SAHD, star trek the next generation, That Look of Parenthood, the six looks of fatherhood
Email ThisBlogThis!Share to TwitterShare to FacebookShare to Pinterest

Yet Another Shout for The Sandworm Party

A guy commenting on this Guardian article, about Treasury secretary Jack Lew demanding action on raising the debt ceiling yet again, responded so well and so accurately that Da-da, the Founder of The Sandworm Party, feels compelled to report the comment in its entirety:

the republicans and democrats are basically the same party. The independent party are so few that they have no influence. The political scheme is to idolize their major donors which are the rich and mega rich while totally lying about their donors ethics being totally corrupt. The republicans and the G.O.P. have to put on a good act to fool the right wing idiots. The working poor have absolutely no say in the matter, and in fact the paid social security funds are being now robbed by both democrats and republicans. The corporations are pressuring the powers that be into believing that corporate welfare being paid in trillions are the fault of the paid social security benefits are dead beats while its the crook banks and the crook corporation that Obama and all politicians are stealing through the off shore cayman islands S corporation. Still 65 billion dollars per month is being stolen by the federal reserve and the treasury department to lend the totally corrupt corporations include the government corporation called the military industrial complex( private corporation with government funded contracts). The corrupt U.S. government and their corrupt corporations are bankrupting the U.S.A., and then trying to blame the working poor that have done enough to give their last survival money to the stinking rotten government with it crony capitalism, and their totally unethical and totally corrupt corporations. All of them are colluding to steal America totally blind and lie so slick and elaborately. This is why the USA is being destroyed by the republicrat crooks. All of them! 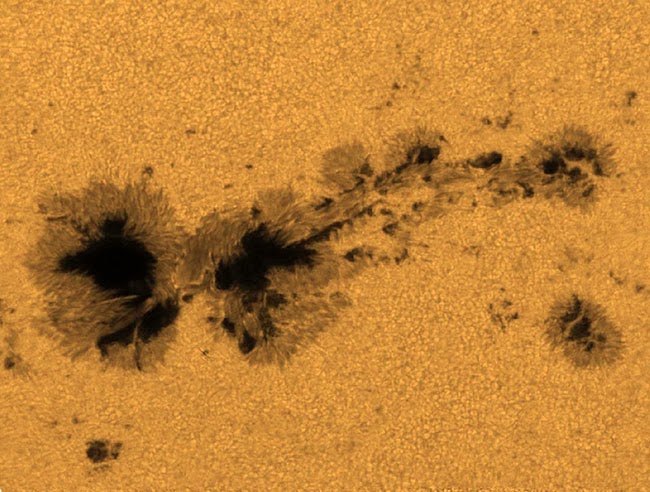 As a Master Heliomancer and Baker, Da-da interprets the above as being a harbinger of DOVES AND BUNNIES: Get DOWN, Mr. Bun-bun! Easter is a -comin'! But don't forget to duck. Hold on, let's back up. As a Master Heliomancer, Da-da interprets the above very real and unretouched sunspot photo taken by Chris Schur at SpaceWeather on Groundhog Day, February 2nd, 2014, as meaning that a kind of cosmic battle is taking place for this planet and all those who live on it -- and GOOD and REASON are winning. You'll begin to see the signs of this shortly. And YES, that means kittens will be safe, and billionaires will catch it in the shorts, and police will have their teeth pulled, and that the weather will cooperate -- a little, and the Federal Reserve will go the way of the dinosaurs while we throw water balloons, and Monsanto will be bulldozed, and bees might just make a comeback, and Congress and the President will do a photo-opp group-hug while doves and bunnies frolic... and ok, your favorite depressing metal band will fall into disuse and dishabille and disband ('cause people will tire of death and start to like happy positive uplifting group-hug music with doves and bunnies) and some of the disbanded musicians will coach kids soccer and some will move to Portland and make really cool electric-assist cargo bikes/velomobiles and some will become computer programmers and write video games about depressive metal bands that disband and some will just drink -- DRINK LIKE THE WIND. Whoa. Full Circle. Anyway, an exciting time to be had by all. Just keep out of the way of the solar samurai. And don't make eye contact. It tends to burn.

Here are the same sunspots the next day: 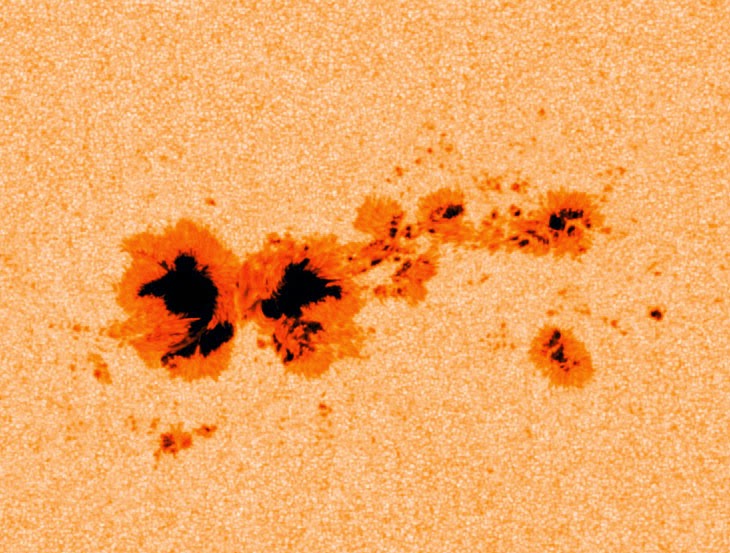 One has either been beheaded, or is doing a backflip in preparation for a massive WHOMP. That's the technical term.
Inflicted by A Man Called Da-da 0 comments

Da-da loves the day of the Big Game, as he has the whole world to himself. Inside, everyone's watching overrated TV commercials framing jingoistic moments on the field, everyone's eating salty junk and guzzling beer and reveling in the misdirection and separation. Yes, while you're inside watching some silly game,  Da-da is OUTSIDE reveling in the quiet, in the complete lack of crowds or mental programming. On Superbowl Sunday, or any other Big Game Day where people are plugged into the machine, you can go out into the world of nature and hear those things normally covered up in mass transportation and mass distraction. You know: wind, trees, birds, the ocean, a quiet forest, a meadow. The mental programming of the Big Game can't compete with the whole world as it once was, and barely remains. It's not even close.

[Note1: Da-da recorded and watched the KITTEN BOWL, which was best with the sound OFF unless you had an affinity for awful cat jokes and lifeless commentary. Even with the sound off, kittens are more entertaining than enormous adults and huge sums of money and old bad ideas smashing into one another. It's not even close.

KITTEN BOWL note: next year, use cat trees and sensitive microphones on the field and eliminate the washed-up celebrity patter and the referee. It was embarrassing. Cats and their noises are infinitely more compelling.] 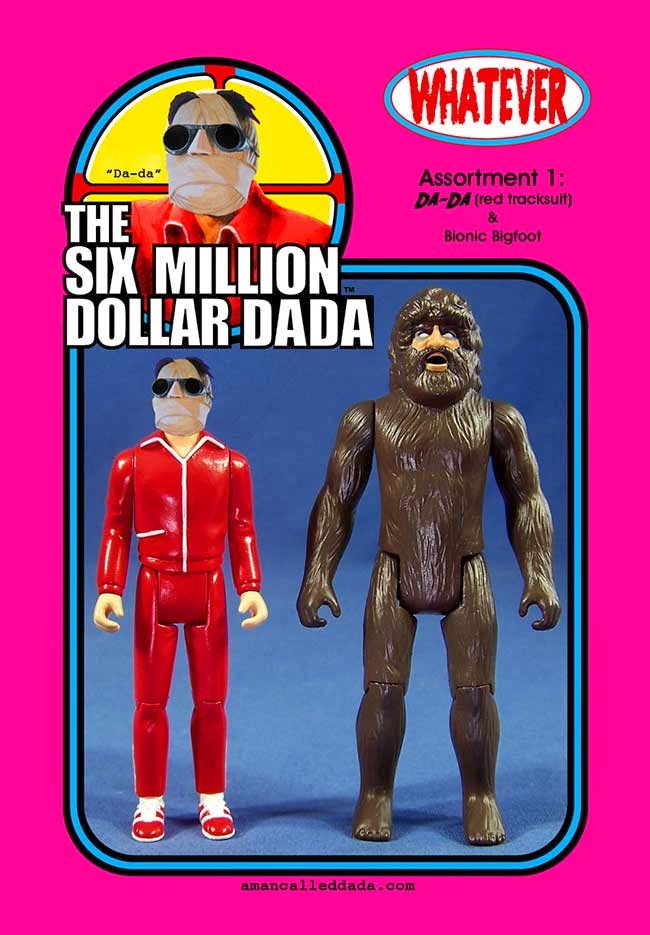 Unfortunately, while $6M adjusted for inflation probably equates to about $23.79 these days, Da-da will have gladly spent about $6M by the time all of parenthood's toys and tools and time and tuitions are totaled for the raising of Da-da's progeny, and Da-da wouldn't trade that summation for anything. Sure, Da-da probably won't have enough moolah left over to buy himself a Royal Tenenbaum track suit, or a plastic 'Squatch, but his children and his children's children will leapfrog him into the future and be that much further along The Path. That to Da-da is priceless.
Inflicted by A Man Called Da-da 0 comments 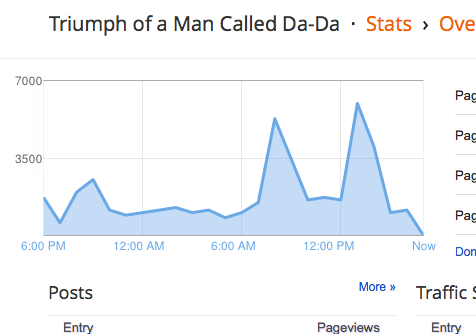 Batman is in the building. Well, he was. All day yesterday. All the pastries are gone. Go figure. 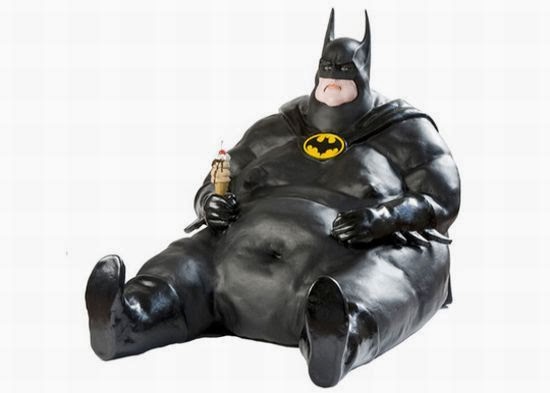 Labels: batman, batman ate all the donuts, batman is in the building, everyone knows it's windy, funny charts
Email ThisBlogThis!Share to TwitterShare to FacebookShare to Pinterest
Newer Posts Older Posts Home
Subscribe to: Posts (Atom)