Mecha-Pilgrim Da-da is HERE to Virtually Eat Pumpkin Pie at Your Cubicle... er, House. Love U.

Tall Pilgrim Grampa is in the House! 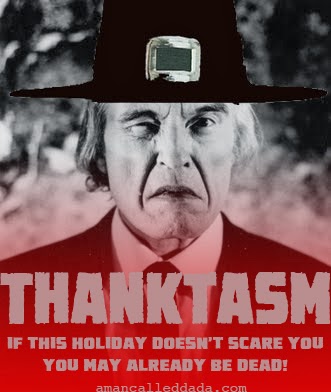 Labels: had enough, i want to believe, i wanted to believe, mad as hell and not going to take it anymore, three branches of goverment
Email ThisBlogThis!Share to TwitterShare to FacebookShare to Pinterest

Welcome to Parenthood You Trophy Parent You

Da-da Finally Got a Pilgrim Dog

Labels: it's thursday, ontological thursday, where am i, you are here
Email ThisBlogThis!Share to TwitterShare to FacebookShare to Pinterest

Mecha-Da-da is Here. Love U. Go Brush Your Teeth.


Welcome to the (sad) future of parenting. This thing, called "Double" from Double Robotics, allows those with indelicate sensibilities to telecommute with $2500 authority, wandering about the office and into cubicles with impunity, saying, "Howdy!" in real-time with full motion (kinda), as well as audio and video, giving remote office workers that special tax-deductible OOMPH necessary in proving that they do indeed exist at the corporate level, and should keep on getting paid for watching Turner Classic Movies all day... er, working. Sounds cool until someone puts a greasy take-out bag on your virtual head while your virtual officedrones snicker and attach post-its that read, "I suck: Ask me how" and "Kick Me, I'm Really Here," all the while wondering why your hourly rates are so high.

Worse, some too-busy-for-anyone executive type is gonna reverse this usage and deploy it at home so they can be at work forever -- free from what they see as, "guilt" -- shirking their parental duties while feigning sad, "connectedness" with their lonely offspring. Talk about phoning it in. Discorporate America, indeed. If you're that busy, or you think you are (pssst, we know you're not), please don't have kids.

Mark Da-da's words: mocking robots will be the hot new trend for the next bazillion years, until they take over.

Da-da Finally Got a Dog

Da-da's Warmin' Up the Parade Machinery

Da-da, the Master of PTA Mystery...

Labels: education, master of PTA mystery, PTA, the pta has risen from the grave
Email ThisBlogThis!Share to TwitterShare to FacebookShare to Pinterest

One of the things Da-da's always done, personally and professionally -- and is indeed known for, besides air-baths in France -- is thinking sideways. It's what Da-da does. Case-in-point: the Apple logo. Let's look at their old logo:

Hm. If you're of a religious bent, or you've taken way too many art history classes like Da-da, this image immediately screams:


Um, Da-da means the action (Original Sin) and not the hard cider. (Alas, it's not real Scrumpy, which is 40 proof.) Originally speaking, here's your basic O-Sin moment:


Does this mean that Jobs and Wozniak were making some kind of religio-/socio-/genderio-/politico- statement with their Apple logo? Were they implying that ALL Apple products and indeed all computers in general are inherently demon-possessed?? Any IT human knows the answer to that one. Alas, the answer is NO. Well, NO for the apple thing, not computers being demon-possessed. Anyway, here's the original Apple logo, which is a sin in itself:

Yup. It's the whole Newton thing. Not nearly as juicy. And for the record, the apple just fell off of a tree Newton was sitting near, it didn't hit him on the head. Oh, and Archimedes invented calculus 2000 years previously, before insulting the wrong Roman guard and transitioning into one of Da-da's math teachers.

Hold it, you're both wrong! This from Wikipedia:


According to Steve Jobs, Apple was so named because Jobs was coming back from an apple farm, and he was on a fruitarian diet. He thought the name was "fun, spirited and not intimidating".[208]

Apple's first logo, designed by Ron Wayne, depicts Sir Isaac Newton sitting under an apple tree. It was almost immediately replaced by Rob Janoff's "rainbow Apple", the now-familiar rainbow-colored silhouette of an apple with a bite taken out of it. Janoff presented Jobs with several different monochromatic themes for the "bitten" logo, and Jobs immediately took a liking to it.

Why did Steve immediately take a liking to it? Because in his mind he'd made a number of connections -- not the least of which is the one Da-da mentioned earlier. Da-da knows this for a fact because he has Steve Jobs here in a big glass case, pickled and covered in electrodes, per his last wish.


In reality, sin-wise, there is no Original Sin. You are perfect and whole and innocent and you've never done anything wrong and you're safe in Happy Cloud Land right now, surrounded by loved ones... and, well, pure love -- REAL love, not that oozy hairy '70s kinda love.

Seriously. Look around. This whole Original Sin thing was merely a tale meant to make the masses feel guilty and easier to control. It's still used today, though the wheels on that bus are starting to wobble something awful.

Speaking of disturbing, THIS is the Ultimate in IT Bathroom Reading:

Pick a page and read out loud. Guaranteed laughter. It's for IT/networking people, but normal people might get it. Those who are weird. And perhaps disturbed. It's all related to the above e-ghoulash, Da-da promises.
Inflicted by A Man Called Da-da 0 comments

Can Woodpeckers Save Football?

Halloween is finally over, it's almost Guy Fawkes Day, and that means holiday mayhem is HERE... as is pre-holiday, pre-bowl mania. Or maybe that's just Da-da. Alas, football won't be around much longer if someone can't create a better helmet to protect kids, 'cause without kids playing football, there will be no football. Da-da's ambivalent about this, as he has no love for the NFL, and college sports need to stop coveting the dollar. Blah blah blah. However, if you want to save football, STUDY WOODPECKERS. And while you're at it, launch all three branches of the U.S. Govt. into the sun. You'll be glad you did. What was Da-da talking about?

Oh, yeah. Woodpeckers and football. Woodpeckers smack their heads against trees a zillion times in their lifetime. On purpose. And they eat bugs. Lots of bugs. Are woodpecker brains riddled with CTE and concussion-related maladies? Nope. Woodpeckers have a special woodpeckery cranial construction that allows this kind of activity. Perhaps this could be used to augment existing helmet technology. Or perhaps humans could be pre-tested for head-banging injury susceptibility. Or those Nazi scientists who seem compelled to genetically modify everything in existence, because they can, might start messing with football player DNA and breed a thicker skull -- which they've already successfully done for NFL OWNERS.

So, you can either do one of the above, or perhaps employ early-man types who have no attorneys:


We also have the option of injecting supra-orbital-ridge-y/cro-magnon-y DNA into existing players, or perhaps employing cro-magnon descendants: 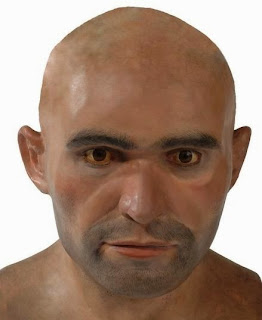 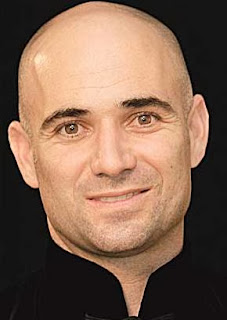 Why Woodpeckers Don't Get Concussions

For woodpeckers, "thick skull" is no insult. In fact, new research shows that a strong skull saves

these birds from serious brain injury.

Woodpeckers' head-pounding pecking against trees and telephone poles subjects them to enormous forces — they can easily slam their beaks against wood with a force 1,000 times that of gravity. (In comparison, Air Force tests in the 1950s pegged the maximum survivable g-force for a human at around 46 times that of gravity, though race-car drivers have reportedly survived crashes of over 100 G's.)

Researchers had previously figured out that thick neck muscles diffuse the blow, and a third inner eyelid prevents the birds' eyeballs from popping out. Now, scientists from Beihang University

in Beijing and the Wuhan University of Technology have taken a closer look at the thick bone that cushions a woodpecker's brain. By comparing specimens of great spotted woodpeckers (Dendrocopos major) with the similarly sized Mongolian skylark, the researchers learned that adaptations in the most minute structure of the woodpecker bones give the skull its super strength.

Notably, the woodpecker's brain is surrounded by thick, platelike spongy bone. At a microscopic level, woodpeckers have a large number of trabeculae, tiny beamlike projections of bone that form the mineral "mesh" that makes up this spongy bone plate. These trabeculae are also closer together than they are in the skylark skull, suggesting this microstructure acts as armor protecting the brain.

The woodpecker's beak does not differ much from the lark's in strength, but it contains many microscopic rod structures and thinner trabeculae. It's possible that the beak is adapted to deform during pecking, absorbing the impact instead of transferring it toward the brain, the researchers report in the journal Science China Life Sciences.

The findings could be important for preventing brain injuries in humans. Each year, more than 1 million people in the United States alone sustain and survive a traumatic brain injury, according to the Centers for Disease Control and Prevention. Another 50,000 people die of their injuries. Understanding the microstructures of the woodpecker's skull could help

Sunday Night at the Non Sequitur