Gravity Has Been Drinking

Da-da rolls all his eyes (mutants have lots of eyes) whenever "experts" talk about the universe. How can you be an expert on something you only see a teeny part of, while dangling participles? Huh? It's like when Da-da was in physics classes and instructors waxed insouciant about physical "laws." There are no physical laws, Dracula. A physical law is merely someone saying, "Hey! It happened again!" It might not happen that way next time. This in mind, would it surprise you to know that gravity, typically 9.8 m/s^2 (or 32 feet per second per second) is different everywhere you go? Yup. It changes from place to place. It even changes IN those same places, fluxing up and down and sideways, changing every picosecond where you are right now. Why? We have no idea. But look at this gravitic satellite view of the earth: 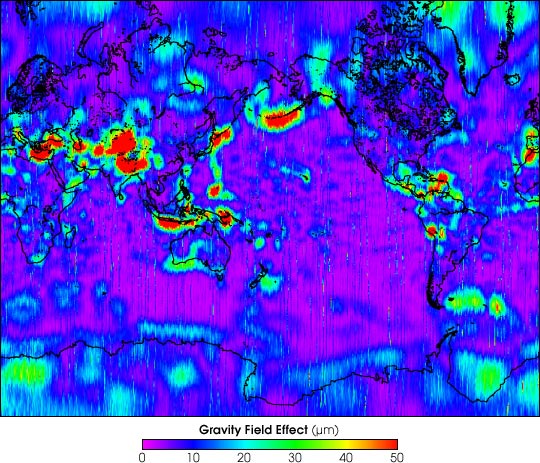 Isn't that cool? Red is higher gravity, blue is lower gravity. Of course, we're talking about a very small change in what keeps you from flying off the earth, but it's a change nonetheless. (Note that this is just a snapshot of that moment; gravity changes all the time. Be fun to see this as a live view during extreme solar activity.) So, why is gravity lower over Hudson Bay versus the Aleutian Islands? Do Aleutians grow taller than Canadians, on average? Da-da doesn't know. No one else does, either. Sure, we're talking microgravities, but no one's ever put sensors in a high gravity locale and a low gravity locale and noted the differences. Is it easier to think in lower gravity? Grow plants? Move pianos? Win at bowling? Da-da will try to locate a UFOnaut and get back to you on that.

No one ever talk about this stuff. Why? Because we don't understand gravity or the inner workings of our own planet -- or how to get politicians to jump into that volcano. (Damn.) Speaking of that, would it surprise you to know that the universe is neither expanding nor contracting... that is, until you look at it? Weird, huh? One of the ancient's biggest secrets was, "The universe is mental." Quantum theory says the same thing. The presence of thought changes everything. Luckily, there's not much of that permeating the planet earth these days.