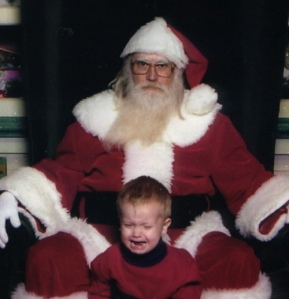 Bad Mall Santa Da-da. Sounds like a cross between a drunken R&B tune and a Grand Mal seizure. A bit o'both, Santa Da-da expects, but since Da-da's a few fries short of salvation, he's forced to go for laughs. (And ok, Da-da's been singing, "Bad Mall Santa Da-da" for a week, now. Sorry for the whammy.)

Anyway, just to prove to Da-da's mother-in-law that Da-da's not just any bum but an ENLIGHTENED BUM (in the American and British senses), this week Da-da's reporting live from the field, having reached a new low high in signing up to be Santa at a local mall -- primarily because he already has the beard (despite being only 30), can automatically reference himself in the Third Person... sometimes even the Fourth Person, and can ramble, RAMBLE LIKE THE WIND. The suit they gave Da-da is GREEN, which Da-da finds oddly appropriate and just a tad literary. If you see Da-da and yell, "TRIUMPH OF A MAN CALLED DA-DA!", Da-da will tear off the costume to reveal his insane mecha-Santa/Brother J tie-dye and then do some breakdancing, some really bad breakdancing. C'mon, it's the holidays... well, almost... the time for really bad breakdancing.

As of this writing, Santa Da-da's already been to, "Santa Kinetics re-Patterning" class, where he was taught how to put on and wear the costume, keep his hands in plain sight, move around like an enormous obese elf, insert a twinkle into his eye (ow), not make any sudden violent movements, laugh like he means it (that was tough), drink Blind Dog bourbon when no one's looking, be brand appropriate to various youth demographics, clandestinely record all shoppers and report nefarious behavior to Mall  Security, clean and remove the Dupont Child Excretion Lap-Shield 3000, shake like a bowl full of.. well, you get the idea. And for whatever reason, the

Da-da's first Yuletime greed victim looked like a miniature Harry Potter, and was equally serious. A little too serious.

"What?" Da-da inquired. "You want what?" Santa Da-da looked at the mom in attendance and she just shrugged.

"Hmm, Rhodesia. Santa's pretty sure it's called, "Zimbabwe" now, which sounds better and is equally unstable..."

"And you shall have it, my little Idi Amin Da-da reincarnation! Merry Chris-Kwanza-ka!"

Da-da gave the tyke a sugar-free, low-residue, high protein kelp "kandy kane" and reached for the bourbon. It's gonna be a long holiday season here in the illusion.