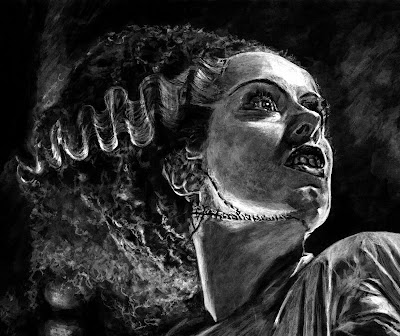 A topical, cautionary tale for those moving inexorably toward WEDDING SEASON. You know who you are. Good luck. We're all counting on you. (What's this got to do with the Aflockalypse? Shhh, wait for it.)

Da-da used to be a classical and jazz musician, and like many quasi-respectable musicians trying to survive in this big ugly unmusical world, Da-da was forced to play theme parks, malls (ug), bank openings (double ug), funerals... and of course, WEDDINGS. No one likes to play weddings. Da-da bursts into flame if he hears, "GREENSLEEVES" (what Da-da used to call, "GREENSNEEZE"), "JESU, JOY OF MAN'S PERSPIRING" -- or the worst: PACHELBEL'S, "CANON IN D MAJOR." Kill Da-da now. (Many is the time Da-da has gone back in time to hit Pachelbel in the head with a shoe.) Sure, these are beautiful pieces of music IF YOU HEAR THEM ONCE; hear them a thousand times and you start donning the musical jackboots.

Having played too many weddings (more than one is too many), Da-da knows that weddings are NOT about the bride and groom. They're about everyone else, a celebration of your blessed union. So, get married and shut up. Just try telling the bride that.

Given hideous amounts of power over others by tacit agreement, brides are forces of nature to be feared. Say, "bride," to Da-da and he heads for the hills. There's no more spoiled and monstrous entity anywhere. Even Bronko and Nagurski run from brides. Except for those rare, cool, "Snow White" erratics, most Brides want it all, they want it their way -- THE WAY THEY'VE BEEN IMAGINING IT SINCE THEY WERE LITTLE PRINCESSES -- and they want it now, you bastard. Where's the bride's chainsaw? That's not to say that all bridal requests are unreasonable. Some are more high maintenance than others, depending on budget; budget goes up, high maintenance-ness goes up.

Now, before Da-da gets to The Event, you need to know something about musicians. They are experts at laughing silently. Any musician who can't is quickly weeded out and sent to Nordstrom to sell women's shoes (and a quick humorectomy). Musicians need to be able to do this so they don't interrupt a performance, and because funny things happen all the time that the audience can't see. So.

Picture a rare winter wedding, already in progress. A huge church is flowing in flowers and wedding guests. The ceremony is almost over, and Da-da and a handful of musicians -- perched in an apse -- are awaiting the bride and groom's kiss, so they can begin the little recessional piece of music that's played as the bride and groom head off to recess. Da-da can't remember what it's called; he's blocked it out. Anyway, at the ultimate moment, when the freshly married bride and groom are turned by the guy in the collar toward the audience for the first time, "wedding helpers" were supposed to release scores of doves INTO THE CHURCH. Not sure how they afforded managed to talk the pastornator into that one. Doves were to be released and fly about while the band played on and little fuzzy bunnies fell from the heavens. But it didn't turn out quite that way.

You see, some genius failed to poke holes in the bird boxes. You know, so the birds could breathe. Just like toddlers and ninjas and camels, birds need AIR. So, at the ultimate moment, poised to wield a righteous downbeat onto the assembled assemblage, the band watched as two burly guys dumped dead doves all over the bride.

The band immediately lost it. Da-da is laughing right now. However, we didn't make a sound. Everyone else was petrified, rooted to their respective spots, while we awaited bridezilla's meltdown.

It never came. The bride looked at the band losing it and burst out laughing.

All the air leaked out of hundreds of pairs of lungs that had been holding breath for something like a minute, and the laughter wheezed out. Yes, it was a miracle. We were beholding that rarest of creatures, THE BRIDE WITH A SENSE OF HUMOR. She and the wedding party proceeded to take all their wedding photos while toting dead birds for the camera, putting them on their shoulders, their heads, wearing them for earrings... Da-da even used one as a trumpet mute to great effect.

So. In terms of weddings -- esp. as we're on the cusp of wedding season planning -- a little advice. Less is more. The above music sucks. A sense of humor is more important than anything else in existence. And PLEASE, poke holes in the boxes. 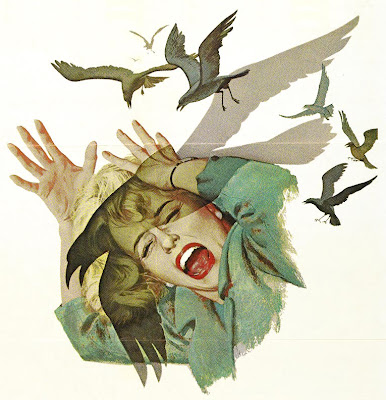