Da-da and his boys were having dinner last night, listening to Harry Potter audio books as is our wont these days (#4, "Tri-Wizard Cup"). These are done by Jim Dale -- who is utterly fabulous, as does ALL the voices, in some cases, over 150! These are better than the movies, as they follow the exact text, not some filmmaker's "interpretation," blah blah blah... so we were listening to Jim Dale doing Peeves when it suddenly dawned on all of us: Peeves was missing from the movies.

How could we have missed that? Peeves is hilarious, and a necessary part of the Harry Potter canon. So, what happened? Well, Da-da missed this one, neck-deep as he was with kids and work and other things in 2010, but...

Indeed, he did, but was apparently making the kids on the set laugh too much. Check out his later (and not entirely safe-for-work) interview about it:

He was the perfect person to play Peeves, but... he kinda wasn't. He'd not read the books. He wasn't a fan. He didn't know anything about the story. So, perhaps he wasn't as into it as he might've been otherwise, basically downshifting into evil madcap silliness, which is arguably what Peeves is all about. Da-da's guessing Rik just read his part of the script and went in with his Rik Mayall genius turned on... which was probably so scene-stealing that the movie would've either stopped dead in its tracks or become even more beloved... who knows. Someone in a comment somewhere sugested that Rik's Peeves may have become Harry Potter's Jar-jar Binks, but Da-da doesn't believe that. Maybe he was fabulous and they cut him to deal with pacing issues, or it was indeed simply because he was making all the kids break up too much on camera. We'll never know. Or will we?

That footage exists somewhere. If they cut it out... they could put it back in.

They could create [GASP]: A DIRECTOR'S CUT, with all the Peeves footage back in. And all of us idiots would buy it and rejoice. And more money would be made, which is what this is all ab... er, and it would be great! Or, if the studios were kind [they're not, they're bankers], they could freely dump the footage online and let us all have it for free. Why not? (Why? Because they're bankers. Worse: ATTORNEY bankers.)

Either way, Rik was obviously a little hurt that his part was cut, and this might give his Peeves-ish spirit some rest. OR, even better -- RIK, IF YOU'RE READING THIS OVER DA-DA'S SHOULDER -- Rik should come back as Peeves the Poltergeist LIVE... er, dead, at one of the studios. Rik could re-enact and even EXPAND his Peeves-ish performance, LIVE from the deadside.

Da-da would pay for that. Like Fred and George said, "Give 'em hell, Peeves." 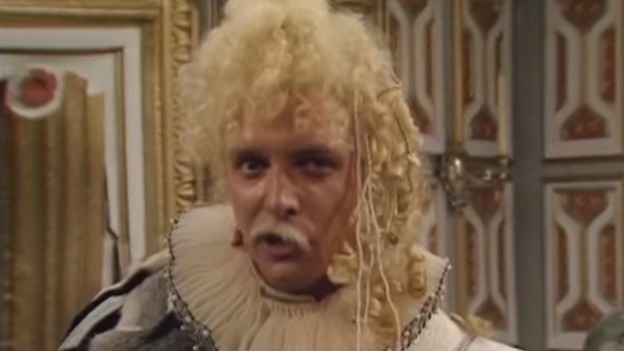 P. S. While you're at it, Copyright Owners XYZ, put back in Winky and Ludo Bagman and Dumbledore's funeral, as well, and... wait. As Da-da's suggested before, just do the whole Harry Potter thing over again as a BBC mini series, with Jo Rowling as producer and director (read ALL THE POWER). Leave nothing out, Jo. Use all new actors. Get right on that and Da-da will let you take all the credit, winky winky bitey nosey.