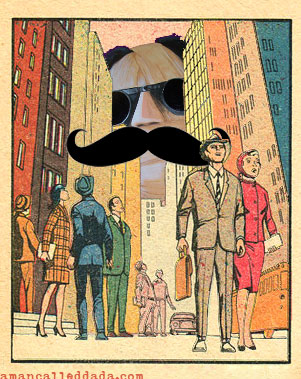 You probably didn't know, but Da-da is a meditation and cogitation and sanitation genius. And since a friend recently asked Da-da how he meditates and what lead him to his current practice, he thought he might as well write up a short primer that describes Da-da's path -- which isnot necessarily the right path for you. There are countless paths. And there's no right or wrong way to meditate, unless you try meditating naked in a tub full of lime Jell-O -- which may result in instant enlightenment, who knows?

Anyway, Da-da gained a deeper part of the river via the books of Yogi Ramacharaka, which were actually written at the turn of the last century by a white guy in Chicago named William Walker Atkinson (he wrote lots of other books, too), but these particular ones were apparently inspired by the teachings of an actual yogi named Yogi Ramacharaka in the 17th Century, as well as by Swami Vivekananda, who was beyond famous in a previous life (he's now an Ascended Master). Anyway, if you'd like a short course of study, try these (in order):
Many are available free online, as they’ve passed into the public domain. Da-da bought the original titles (small blue hardbacks) because he prefers books. They’re fast reads, with precious few anachronisms. The above list will probably take one year of study, and supercharge your meditiation dramatically. It will also make you healthier if you follow the teachings.

As for the "requirements” of meditation (sitting a certain way, humming, balancing a lhasa apso on your nose, etc.), toss out all the stuff. It makes no difference how you sit or what you do, but a few things are important for safety sake. This is what Da-da does:


1. Be comfy in a quiet place, sitting any which way, chair or floor or couch
2. Close your eyes
3. Imagine a one-way (going DOWN) "grounding cord” dropping from your root chakra to the center of the earth
4. Imagine a big gold/white ball of protective light energy glowing all around you (this is an important step)
5. Don’t strain, relax
6. Think (once): ”Only those with my greatest good are welcome”
7. Listen, and pay attention. (Don't fall asleep!)

Once you get comfy with this routine and make some headway (you'll know), the Nth step is to ask for a spirit guide. When you take this step, and you don’t ask for someone by name (there are lots of spirits willing to help) be sure to ask for someone, “with my greatest good in mind,” as there are lots of THINGS out there that will pretend to be advanced beings. You’ll need to train yourself to differentiate between light and dark beings. Note: if you “see” any beings, and you cannot SEE their eyes, tell them that they are better served elsewhere. Also, feel free to ask or meditate upon a question you might have, about... well, anything.

NOTE: Read Da-da previous post, "THE INVITATION" if you haven't already. If you're hearing a tone in your head, chances are good that IT'S NOT A DISEASE. It's a focus point. You should use it in your meditations. Additionally, if you're having troubles getting into a meditative state (it took Da-da a while), try using isochronic tones.