The One Where Da-da Shows How to Defeat Drones


NOTE: The following is for entertainment and informational purposes only. Da-da isn't suggesting you break any laws or do anything that would hurt anyone. You read these words taking full responsibility for your own actions, you scion of a silly person.

Anyway, for those plagued with drones operating without identification or warrant, Da-da has two suggestions: boomerangs and bolas.


Typical hovering-type drones employ highly frangible plastic rotors. Even a well-thrown Frisbee, football or baseball -- or a weighted fishing net -- would take one out. All you need is someone with half-decent hand-eye coordination to whack one out of the air. You'll want to practice aiming and throwing a bit beforehand, as well as warn people before you start hurling. Note that other people will probably pick up the gauntlet after it lands and try their own hands, so get ready to duck.

Please also note that you shouldn't use a hunting boomarang like the one below while around crowds, as they're too sharp and could hurt someone. Da-da's hunting boomerangs (that he uses for non-hunting boomerangingness) typically stick in the ground like flying knives upon return. The triskelion boomarang and bolas above are much safer to use, in Da-da's humble opinion. However, the hunting ones go faster and farther, and are easier to aim, so they might work better over open ground where people aren't in danger of being hit. 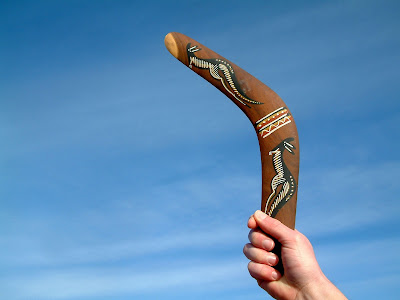 Finally, please note that these are much better options than shooting at drones with guns. Shooting at drones, or in the air in general, is both illegal and highly dangerous, as the bullet comes down with the same force with which it went up, and could kill or injure someone.

Really, the best way to defeat drones is via anti-drone legislation. But a way to rid the skies of big drones is with thousands and thousands of little drones. Or a million mylar balloons; just pick them all up when you're finished.
Inflicted by A Man Called Da-da

A bullet does not come down with the same force with which it went up.

It does if it's parabolic; it might lose 20% of its energy, but that's enough to injure someone.