An Overlookiness Explained and Jerked Unsteadily


After an intense week of war-of-the-gargantuas sibling rivalry, Da-da sat 5YO Bronko and 7YO Nagurski down to explain a concept necessary to life on this and every other planet -- that is,  forgiveness. They then asked a reasonable question.

"Forgiveness" is an old word that has taken on more baggage than Ethel Merman on a TransAtlantic steamer, so Da-da used another word that means the same thing.

"You think nothing of throwing a huge box of Legos down the stairs, right?"

"Right!" they both agreed and smiled. They could understand that quite well.

"You don't think you've done anything wrong," Da-da explained. "You're just interested in watching millions of multi-colored thingies cascade down the stairs."

"You pretty much overlook the fact that you're not supposed to do this, like a lot of your own actions -- unless you think Santa's watching. But when your brother does this, with say that special space shuttle you spent all afternoon making, then you probably get mad. When your brother does something you don't like, as he often does 10,000 times a day, don't say he's stupid, or that he's the worst brother in the world, or hit him with the cat. Instead, you could try to imagine he's YOU. YOU just tossed the Lego space shuttle down the stairs. Now imagine that that kid on the playground who's hogging the monkey bars is YOU. You can watch YOU play with something for hours, right?"

Da-da saw that this tack was sticking in their craws.

"Ok, that might be too weird for you, seeing everyone around you as YOU -- which they are, by the way -- so instead, try imagining that everyone in the world is related to you. See them as members of your family... family you actually like."

"Sure. And your brother and your cousins and uncles and aunts and grandparents. See everyone as favorite members of your family and you won't get so mad at them when they take your favorite toy, or cut in line in front of you, or take the last piece of cinnamon toast. Instead, you see them do these things and you say to yourself, 'That Uncle Fred,' or 'That silly Bronko.' Then BOOM: it's out of your mind. You're not mad about whatever it was that might annoy you, because it's been done by someone you already know, by someone simply being themselves -- by someone you kinda love. Hate has no room when there's a little love in there somewhere."

"What about the cats barfing everywhere."

"That's why Da-da installed an airlock on the house, so we can just CHUCK them out..."

"No. That's efficiency. You see, even Da-da has to learn to overlook things, especially when it comes to anything he has to clean, again and again, like cat barf..."

"Why don't you overlook the cleaning?"

"Why don't you go play in the other room. Quietly. My overlookiness is getting strained."

Da-da of course tried to overlook the fact that 99.99% of his pearls are regularly devoured by adorable swine, as he jerked unsteadily away to be judged by complete strangers to whom he's undoubtedly related. 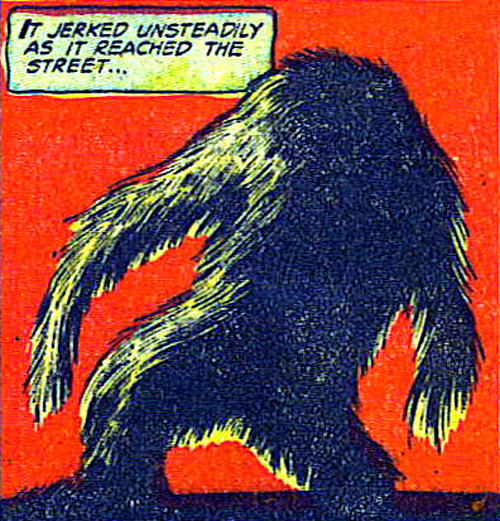