The Taking of Da-da ONE TWO THREE 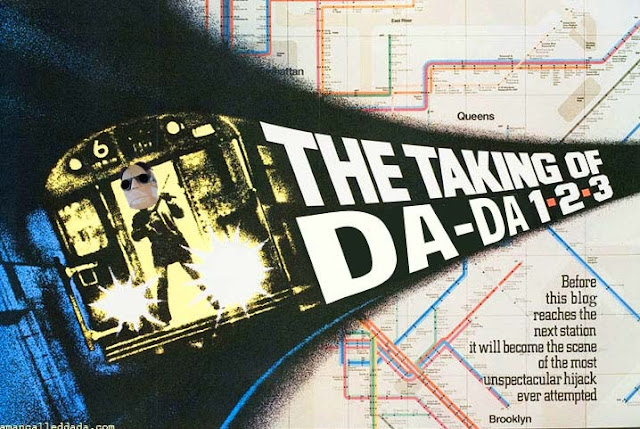 He's not really that old, but Da-da has lived several lives, whether he liked it or not. Prior to math and science and humanities -- and a long cool dip into all things anomaly and parental brain damage -- Da-da was a professional jazz and classical musician for over a decade. (Da-da considers himself a recovering musician.) Da-da merges, or perhaps CONFUSES, this conflicting knowledge base with his love for movies, and has maintained for years that cinema's real third dimension is SOUND. In capital letters. Especially in terms of music. (The gimmicky 3-D process itself is nothing but a crutch for a bad movie.)

Someone should do this as a short subject: take a simple scene of two people in a room. Simple dialogue. Run it with no music. There's a certain gritty feeling to it. Now add circus music over the shot, in the background. Totally different feeling. Sorta, "Carnival of Souls." Now drop that and use a moody faux-string wash a la early X-Files. Again, a totally different feeling. Same scene, same actors, same action, but a totally different clutch of emotions each time. Such is the power of music over human emotion.

Musically speaking, it goes without saying that composers invariably listen to one another and are influenced back and forth all over the place, which is great. There are countless historic examples, but there are also easy-to-access cinematic examples.

David Shire's neurotic jazz-funk soundtrack for, "The Taking of Pelham One Two Three (1974)," SOUNDS like 1974; you can feel the naugahide, the big bushy sideburns, the gritty NY of the '70s. Shire's score is brash and disharmonic and full of chaotic energy. Speaking as one who's played a lot of '70s funk (it's almost better than sex), it was fun to hear the PELHAM score for the first time, just recently in fact; Da-da had seen the film, but not from the beginning. (There is simply NO ONE as good as Robert Shaw acting these days.)  Listen to the main title before you move on:

Now, have a listen to Chris Boardman's sociopathic jazz-funk soundtrack from, "PAYBACK (1999)" with Mel Gibson (a remake of Lee Marvin in, "Point Blank (1967"). Boardman was 20 when PELHAM came out, and it obviously stuck with him -- or with one of the key folks in the production: PELHAM sounds like a drug coursing through PAYBACK's blood stream:

The latter is undeniably an homage to the former, and... well, Da-da likes PAYBACK a bit better; Da-da's a sucker for minor counterpoint, which we already knew. Boardman cranks up the drama more than Shire, but the influence is unmistakable. (Note: Da-da also liked the original theatrical release better than the director's cut... 'cause the music was different! Not half as good.)

Thomas Newman's style is easily recognizeable (by Da-da, anyway), and has been copied a lot, it seems, even by Newman himself. (Da-da has repeatedly wished he were part of the musical Newman family). So. Try a few chunks of Newman's score from, "Scent of a Woman (1992)" which buoyed Al Pacino's Academy Award-winning performance (pay special attention to the 4:00 minute mark):

You can almost hear the music sliding around inside Newman's head. These three soundtracks are actually one big original musical thought. Da-da's not casting aspersions here. Far from it. The three soundtracks sound like one complete master suite.

Da-da loves Dave Grusin. Unfortunately for Dave, Da-da's got everything he's ever done memorized. This was thrown into sharp relief when Da-da recently saw, "Random Hearts (1999)," with Harrison Ford, for the first time... and heard Dave's score for, "Fabulous Baker Boys (1989)" all over it -- one of Da-da's al-time favorite movies, because he lived it -- the same score that brought Dave an Academy Award. (Da-da has earned the right to call him by his first name, btw.)

It seems Da-da has more Carter Burwell-scored films in his collection than any other. Burwell started his career scoring the first, "Blood Simple (1984)" -- and all the rest -- of the Coen Brother's films, as well as a zillion others, each with its unique style, but each can be traced back to Burwell's core ideas of simplicity and building tonal tension/release. In order of appearance:

Da-da has lots of this type of musical bloodline ancestry in his head. There are countless examples. Da-da was made acutely aware of this one day when he stopped and looked at the entirety of his movie collection, wondering why he chose to own those certain movies, what they all had in common. As it turned out, the common denominator was music.