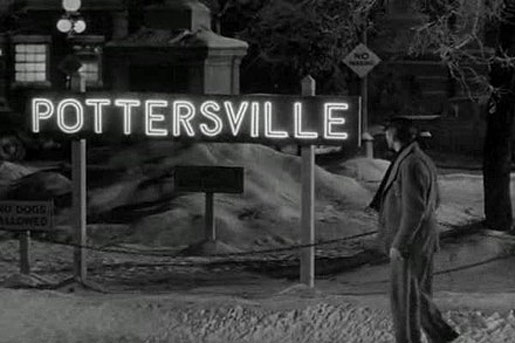 [From the December 26th, 1946, Pottersville Post: “State and local authorities have finally given up on Pottersville’s biggest and costliest manhunts in recent memory. After a statewide search by Pottersville Anti-Terrorist Strike Teams, county detectives and cheerful K-9 squads, all attempts to turn up any trace of the fugitive known as, “George Bailey,” have failed. However, while searching for said villain, authorities have uncovered an odd cult made up of individuals unknown to Potter. The cult’s members have taken to leaping off several of the area’s fine bridges, shouting “Clarence!” for some as-yet unknown purpose. The shadowy, ‘Clarence,’ was unavailable for comment at the time of this writing.”]


Most folks have their personal scapegoats, those individuals, ethnic groups, or political organizations responsible for various post-Millennial meltdowns; some even feel the aforementioned are manifestations of an evil entity, spreading malice via bar-code numerology, fast food franchises and disposable diapers. Others blame oil companies, Goldman Sachs, Corporate America, etc. Da-da isn't here to castigate you for thinking the majority of your problems are interwoven into a cosmic discorporate tapestry of malevolence stemming from Steven Spielberg, Windows 8 and forced fluoridation, because that's all true (Steve is holding Da-da's children hostage right now via "ET"). But Da-da does have incontrovertible evidence that ONE MAN, over and above everyone else, is to blame for all our problems. Who is this monster?

George sits sipping coffee with Clarence Oddbody, the friendly, bumbling angel, after an unsuccessful suicide plunge into an icy river.

“I said I wish I’d never been born!” George says irritably from inside his soaked long underwear.

“Oh, you mustn’t say things like that!” Clarence implores. “Wait-a-minute. Wait… a… minute. That’s an idea.” He looks Heavenward. “What do you think? Yeah, that’ll do it.” A pause. “All right,” Clarence announces with a flourish, “you’ve got your wish. You’ve never been born.” 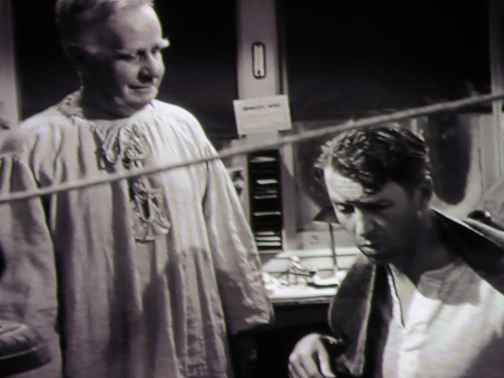 As George receives his “gift,” a stiff breeze blows the door open to the little shack, due to our own Big Bang and consequent cosmic expansion.

George and Clarence then venture forth into the Non-George Bailey/Pottersville Dimension, for a libation within a microcosm of what’s to come: Nick’s bar (note Capra’s Hell reference). This smoke-filled bar, run by the eponymous Nick (played by Sheldon Leonard, who else), is hardly the friendly neighborhood tavern; Nick provides us with our first clue that all is not as it seems as Clarence tries to order a foofy drink:


“Hey look, Mister. We serve hard drinks in here to men who want to get drunk fast and we don’t need any characters around to give the joint atmosphere. Izzatclear? Or do I have to slip you my lip for a convincer?” [Waves fist menacingly.]

George comments on never seeing Nick act that way, to which Clarence comments, “You’ll see a lot of strange things from now on.” Soon after Clarence and George are tossed out of the bar, Nick then mockingly doles out “wings.”

You know the rest. George goes on to discover that his lovely Bedford Falls, the Utopian Dream, has been transmogrified into Pottersville, named for the evil, money-grubbing miser and central banker, Mr. Potter. In this new dimension, crime is rampant (evidenced by police sirens, errant gunshots, and showgirls being tossed into paddywagons), lascivious lights strobe menacingly amidst bars, dancehouses and pawnshops, all the while serenaded by boozy jazz (the only good part about the Pottersville Dimension). All this decadence taunts the remaining good and virtuous into pawning their lives for a stiff drink, an inane gambling thrill, and a chance at making forty-or-so half-naked dancing girls who “know Potter.” In short, Bedford Falls had gone Vegas.

Even George himself, the previous Barometer for Goodness and Fair Play, goes crazy, assaults his wife (well, they aren’t married in this dimension), and slugs Bert the cop, who then shoots across a crowded square at a retreating George. George runs for the bridge in a confused and gangly mass of pleading, Jimmy Stewart-esque remorse… but help is on the way.

God takes pity on ol’ mossback George and plants him firmly back in his own dimension, where it’s snowing again (to cover up crimes of the past)... back where police say things like “STOP, or I’ll be forced to say ‘Stop’ again”... back to smiling, happy consumers... back to light holiday traffic and polite drivers... back to family and friends and neighbors and holiday cheer... BACK to the GEORGE BAILEY DIMENSION, LEAVING US IN THE SEEMINGLY TEMPORARY POTTERSVILLE DIMENSION... aka, "Bedford FALSE."

I’m certain that few, if any, will believe Da-da. But he expects to see a few more of you in line at Myrna’s Video-O-Rama & Discount Liquor, quietly purchasing your own copies of Capra’s holiday reminder. You’ll take it home and soak up the 80-proof holiday cheer, lamenting your loss of Paradise.

Then again, perhaps one or two of you will activate that latent bearded hippy freak that lives deep within your shell of fey capitalism. Perhaps you’ll join Da-da as he jumps off every available bridge, dam and waterway in a vain attempt at bringing back Goodness and Hope and Neighborliness and Fair Play -- and a bunch of other really great words Ben Franklin used to shout while taking air-baths in France -- thus dispelling the evils of the Pottersville Dimension. It's ok if it doesn't work: the fall will probably kill you. 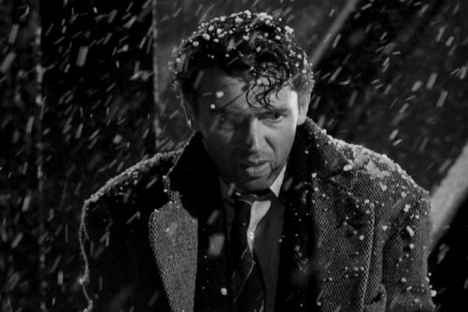